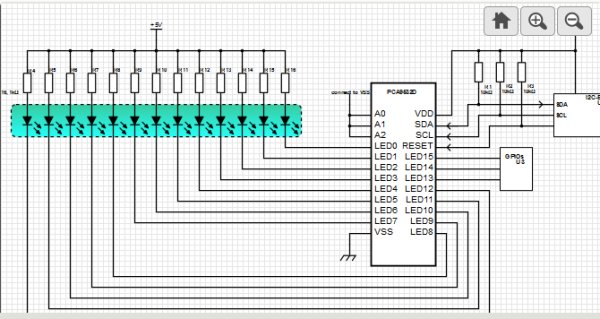 This project is devised for LED dimming using NXP Semiconductors’ PCA9532 16-Bit I2C-Bus LED dimmer. A lot of solid-state lighting applications require control over the emitted intensity of light for both functional and aesthetic requirements. Some of these applications also require a full dimming capability from fully ON to fully OFF. LED dimming potentially improves light source efficacy and lifetime.

The PCA9532 is an IC that is designed for controlling 16 LEDs over and I2C bus. It also includes the logic to act as an I2C slave device as well as the drive capability for directly driving LEDs. As well as being able to switch each of the LEDs ON and OFF independently, the PCA9532 also has two fully programmable PWM controllers that can be used to control up to 16 LEDs. Each PWM channel has a programmable period ranging from 0.6Hz to 152Hz, and a programmable duty cycle from 0-100%. This means the LEDs can be set to blink steadily and visibly, or dimmed. In this circuit, 13 LEDs are connected on pins LED0-LED12. The 1kΩ pull resistors required are fitted to the 5V supply. Once programmed, the internal oscillator allows the I2C bus to be disconnected from the PCA9532 with the LED continuing to be dimmed, something not possible with normal GPIOs. This enables electronics manufacturers to have supplementary LED dimmers in their systems, while freeing up the microcontroller and the I2C bus for more efficient operation of the system.
The I2C are targeting applications ranging from mobile phones to servers in computing, communication, and networking applications. Having a frequency range of 160Hz to once every 1.6 seconds, with a duty cycle range of completely off to 99.4% on allowing both dimming and blinking of LEDs. These new 2-, 4-, 8-, and 16-bit devices allow designers an easy way to build systems with more dimming LEDs than previously possible using just basic General Purpose I/Os (GPIO) or microcontrollers (MCUs). Manufacturers of applications such as cellphones and servers are increasingly requiring multiple blinking and dimming LEDs for eye-catching keypad lighting applications, as well as practical purposes such as status indication. The new PCA953x LED Dimmers allows more system flexibility by off-loading the LED power consumption and by eliminating the programming of the MCU.

The plan was easy - enclose Raspberry PI in the GameCube’s housing. I figured out the layout of internals beforehand...