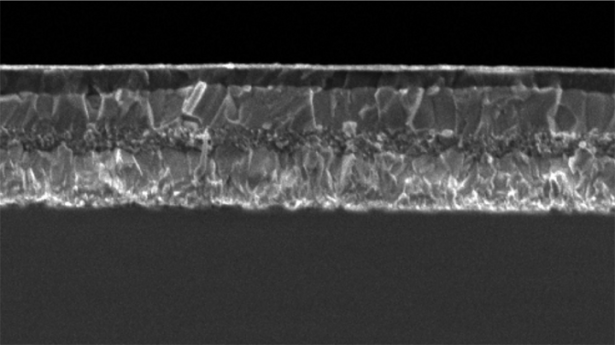 17.03.16 – EPFL scientists achieve the highest yet reproducibility for perovskite solar cells combined with a boundary-pushing 21.1% efficiency at normal operating conditions.

Perovskite solar cells hold much promise for cost-effective solar energy. However, heat stability is an issue, and can significantly limit the solar cell’s long-term efficiency. A team of scientists led by Michael Grätzel’s lab at EPFL has now developed a cesium-containing perovskite solar cell that has achieved efficiency of 21.1%, as well as record-level reproducibility. The work is published in Energy and Environmental Science.

By adding cesium, the EPFL scientists, led by postdoc Michael Saliba, made the first ever triple-cation perovskite mixture (Cs/MA/FA). The new films are more heat-stable and less affected by fluctuating surrounding variables such as temperature, solvent vapors or the heating protocol used for the device. But more importantly, they also show stabilized power-conversion efficiencies of 21.1% and outputs at 18% under operational conditions, even after 250 hours.

“This is an absolute breakthrough,” says Michael Saliba. “These properties are crucial for commercializing perovskite photovoltaics, especially since reproducibility and stability are the main requirements for cost-effective large-scale manufacturing of perovskite solar cells.”

The project was funded by the European Union’s Seventh Framework Programme for research, technological development and demonstration, the SNSF-NanoTera (SYNERGY) and the Swiss Federal Office of Energy (SYNERGY), CCEM-CH, and the King Abdulaziz City for Science and Technology (KACST).