2:3 SCALE VT100 TERMINAL GETS CLOSER TO ITS ROOTS

When [Michael Gardi] finished his scaled down DEC VT100 replica a few months ago, he made it very clear that the project was only meant to look like a vintage terminal on the outside. A peek into the case revealed nothing more exotic than a Raspberry Pi running its default operating system, making the terminal just as well suited to emulating classic games as it was dialing into a remote system. But as any hacker knows, some projects end up developing a life of their own. 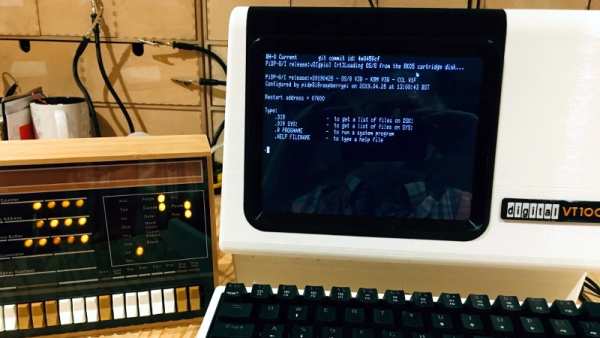 It started simply enough. The addition of an RS-232 Serial HAT to the Raspberry Pi meant that the 3D printed VT100 could actually operate as a serial terminal using software such as minicom. Then [Lars Brinkhoff] got involved. He loved the look of the printed VT100, and thought it deserved better than a generic terminal emulator. So he went ahead and started developing a custom terminal simulator for it to run.

The idea here is that an an 8080 emulator actually runs an original VT100 firmware ROM, warts and all. It makes all the beeps and chirps you’d expect from the real hardware, and there’s even some OpenGL trickery used to mimic an old CRT display, complete with scan lines and a soft glow around characters.

Naturally the visual effects consume a fair amount of processing power, so [Lars] cautions that anything lower than the Pi 4 will likely experience slowdowns. Of course, nothing is stopping you from running the simulator on your desktop machine if you’re looking for that classic terminal experience.

Did this gorgeous recreation of the VT100 need to have a true serial interface or a simulator that recreates the unique menu system of the original? Not at all. Even without those additions, it blew us away when [Michael] first sent it in. But are we happy that these guys have put in the time to perfect this already stellar project? We think you already know the answer.

Source: 2:3 SCALE VT100 TERMINAL GETS CLOSER TO ITS ROOTS