MiniNodes has launched a $259 carrier board for developers seeking to build a mini Arm Cluster. The board supports up to 5x Raspberry Pi Compute Modules 3 modules. The 5 Node Raspberry Pi 3 CoM Carrier Board offers a switched Gigabit Ethernet port to enable networking accessibility to each of the modules. A DC jack for power is also available. The board additional slots are designed to add five Raspberry Pi Compute Module 3s, to bring ‘extreme edge’ compute capacity in remote rural communities, factory and building automation, smart city devices, mining, forestry, environmental, and renewable energy installations such as solar, wind, or hydro, and edge AI projects. 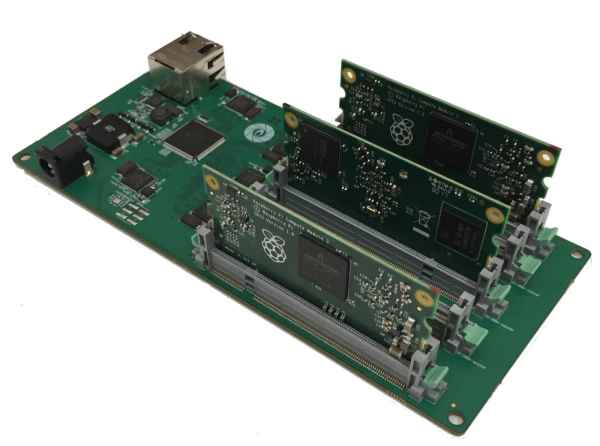 Another way you can use the board is right on your desk, and according to MiniNodes, this is a good means of learning compute clustering, Docker Swarm, Kubernetes, or general purpose development of Python, Arm, Linux, and more! The board is said to also be applicable to miniNodes, which offers server hosting based solely on low-powered Arm servers using a series of single-board computers, which includes Raspberry Pi, 96Boards, HiKeys, Pine64s, and Odroids.

There are no detailed specs available for the 8.0 x 4.0 x 4.0-inch board. The various 67.6 x 31mm RPi CM3 modules provide the same 1.2GHz quad-core -A53 SoC as the RPi 3 Model B SBC, but not the faster 1.4GHz 3B+. Also available is 1GB of LPDDR2 RAM and on the standard model, 4GB eMMC. The 5 Node Raspberry Pi 3 CoM Carrier Board is a is an important board that creates a solution that can be used in a host of scenarios to deliver compute capacity to places that were not previously accessible.

Why Did We Build Skin Cancer AI? According to the Skin Cancer Foundation, half of the population in United States...