I’ve always wanted to know what the “tube magic” was all about. There is much opinion in the science of music production, probably because music and its perception is highly personal and subjective. Ive always imagined that since transistor amplifiers were “perfect” with their large amounts of negative feedback, great linearity, and low THD that tube amplifiers must add something to sound that generates their appeal. From the reading I’ve done it has to do with harmonics. 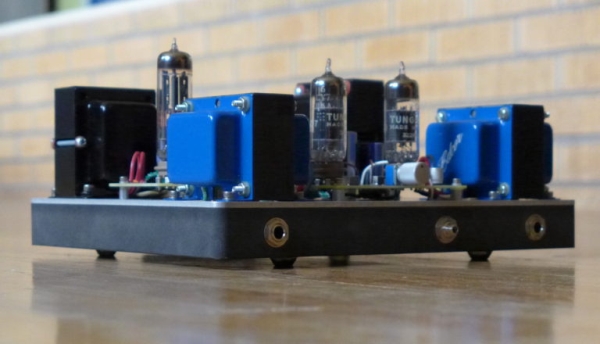 After getting back into headphones because of my kids, I decided to try building a tube amplifier that would drive my nighthawks. More specifically I wanted to build an amp that would be sort of an old school / new school hybrid, one that used circuit boards and SMT components for good EMC considerations, but had no semiconductors at all and no negative feedback.

I owe much credit to Matt at cascadetubes.com, whose design of the 6CY7 amp is what I used with some modifications. This amp appealed to me not only because of the SET topology featuring no negative feedback (second stage does have degeneration), but also because the first and second amp stages for each channel were in their own tube. This should guarantee high channel isolation, and with the output tranformers I can send a differential signal over twisted pair to each side of my headphones since they have seperate plugs for left and right. It basically lets me build a power supply and two mono block amplifiers on top of a metal ground plane, with left and right channel isolation all the way to the headphones.

This hack will allow you to directly share WiFi from a PC to a Raspberry Pi connected through a LAN...