For this to work you must obviously live in an area that can receive both signals. My circuit is based on two modules taken from two radio clocks bought at Lidl’s supermarket. Originally both were for the DCF clock but by substituting the original 77.5kHz crystal with a 60kHz crystal, one of the modules was converted to MSF.

Notice that both antennas are lined up in my photograph. This is because Anthorn and Mainflingen – as seen from Limavady – are roughly in the same direction. The alignment of the ferrite rods obviously has to be adapted to your location. The circuit is based on the single clock projects found elsewhere on this site. The supply for the two actual receiver modules makes use of a 3.3V zener diode. Supply voltage is 5V. The four links allow both the output signals and the LEDs to be inverted by moving the link. Each group of four NOT gates – on the pcb – consists of two 7400 NAND gates wired as Not gates.

I found that the circuit worked extremely well and reception is near perfect under most conditions.

I have written a simple little single tasking graphics program which plots the output of both clocks one over the other. The MSF clock is yellow, the DCF clock is green. On the right is a small section of the output.

Not much can be learned. The most interesting bits are the beginning of minute markers. This is a half second ON for the MSF clock and a full second OFF for the DCF clock. Notice also the double pulse in first DCF second indicating a 100ms difference between atomic time and GMT. This used to be 400ms not all that long ago. 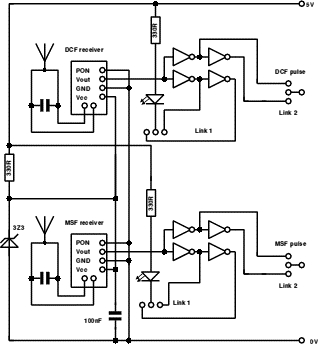 I have highlighted the interesting bits. Anything you see in red was not produced by my program but inserted via !Draw.

Here is a link to a zip file containing the draw file of the pcb layout, the circuit diagram and the BASIC V program below.

Version 2 of the program allows you to plot continuously or screen after screen. You can also change the time base.

This project uses two groups of  eight LEDs sharing eight GPIO pins via one of my Pi interfaces. The anodes...