The humble USB-C port has brought us so many advantages over its USB ancestors, one of which is as a handy display output for laptops. Simply add an inexpensive adapter and you can hook up everything from a mobile phone upwards to an HDMI display or projector. There’s a snag though, merely having USB-C is not enough as the device has to support the display feature. It’s a problem [Gunnar Wolf] had to face with a Lenovo ARM laptop, and his solution is unexpected. Instead of an adapter, he’s used a Raspberry Pi 3 and some software tricks. 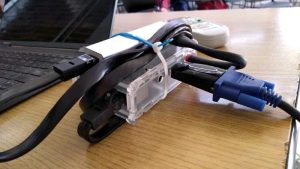 The obvious route to an off-board Pi mirroring onboard video is to use VNC, which he tried but found wanting due to lagginess. As a user of the Wayland compositor he found he could instead use wf-recorder and send its output to a stream, and thus capture his screen in a way that the Pi could read over the network. It’s not quite as convenient a solution as a pure-hardware adapter, but at least it allowed him to share the screen.

It’s surprising how often we find projects needing to mirror the display of a computer using what hardware is to hand, at least this one is more elegant than some others.

Source: A RASPBERRY PI AS AN OFFBOARD DISPLAY ADAPTER