When [314Reactor] got a robot car kit, he knew he wanted to add some extra things to it. At about the same time he was watching a Star Trek episode that featured exocomps — robots that worked in dangerous areas. He decided to use those fictional devices to inspire his modifications to the car kit. Granted, the fictional robots were intelligent and had a replicator. So you know he won’t make an actual working replica. But then again, the ones on the TV sho didn’t have all that either. 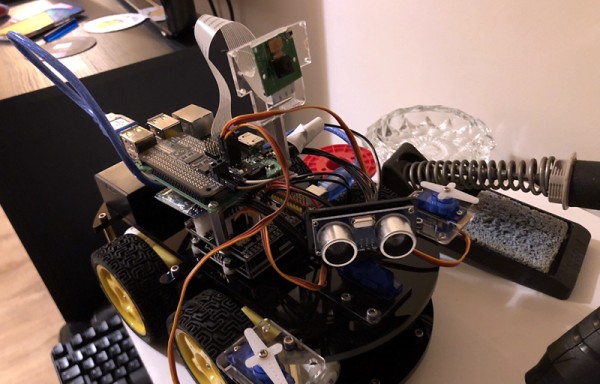 A Raspberry Pi runs Tensorflow using the standard camera.  This lets it identify objects of interest (assuming it gets them right) and sends the image back to the operator along with some identifying information. The kit already had an Arduino onboard and the new robot talks to it via a serial port. You can see a video about the project, below.

The design is complicated a bit by the fact that the original kit uses a Bluetooth adapter to send and receive serial commands from a mobile device. However, the controller software with the kit, though, allows for extra buttons, so the Arduino can receive command and send them to the Pi.

The code for the robot — known as Scorpion — is available on GitHub. The extra commands relate to the camera and also some servos that move pincers to mimic the TV robot. Images return to the operator via the Telegram cloud service.

We have to admit, the Scorpion isn’t quite the same as an exocomp. But we can see the influence on the design. It wasn’t smart enough to identify itself in the mirror, so we don’t think it achieved sentience.

We’ve seen smart robots using Tensorflow before. If you prefer, you can always try OpenCV.

Wearable microcontrollers have found their way into cosplay, fashion, and daily wear but are usually textile based. In this Skill...