Testing the driver circuit using LEDs, although easy, yields only typical results because the tests don’t factor in worst-case LED parameters and often generate undesirable light and heat during driver debugging. Although using a constant resistance might seem to be an appropriate approach, a resistor approximates an LED load at only one point on the current/voltage curve. An electronic load may prove to be a more useful approach. The control loops of the driver circuit and the electronic load, however, often result in system instability and oscillations. 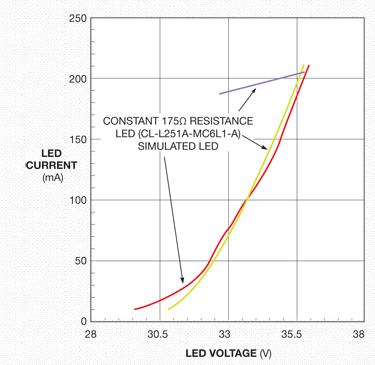 Figure 1 illustrates a typical LED-driver circuit using a low-cost simulated-LED circuit. The simulated LED accurately mimics a real LED at a user-programmable threshold voltage. A simple Darlington current sink, Q1, provides a wide range of LED threshold voltages. The size of the heat sink attached to Q1 and the power capability of Q1 are the only limits on the amount of power the simulated LED can dissipate.

You can easily tune the circuit for any LED voltage. Place a constant voltage across the simulated LED. Tune the circuit by adjusting resistor R1 until the circuit draws the desired current. You can adjust the shape of the voltage knee by making small changes to resistor R3, although this step is not usually necessary.