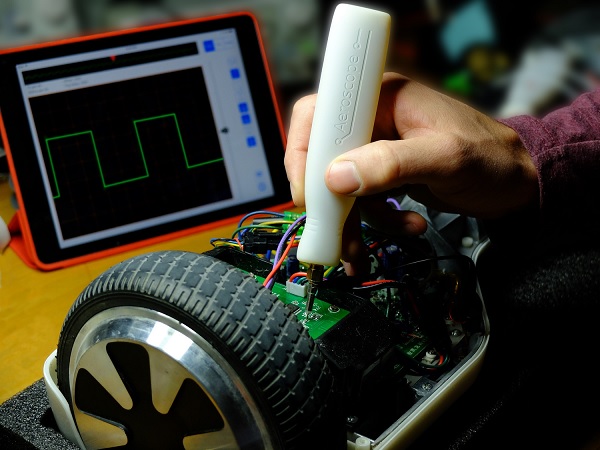 A pair of former engineers from Agilent (now Keysight) Technologies are working on an oscilloscope that will connect to an iOS device for its user interface. The Aeroscope, conceived by Alexander Lee and Jonathan Ward, looks like the kind of device that you’d use on home projects or in field locations. I recently spoke with Lee about the design. At this time, Lee expects to ship in the fall of 2016.

The Aeroscope will be a one-channel device where the electronics are in a “pen” form factor. An SMA connector will let you attach mini-grabbers or other probe tips. Analog bandwidth is 100 MHz with 500 Msamples/s sample rate. It should store 10 ksamples of waveform data.

“We designed the hardware from scratch,” said Lee, focusing on power and the analog front end.” According to Lee the Aeroscope will have a ±40 V input range. It’s based around an 8-bit ADC (analog-to-digital converter) and a programmable gain amplifier. An FPGA (field-programmable gate array) handles triggering and memory management. An ARM-based processor handles communications to the BLTE (Bluetooth Low Energy) transceiver.

Lee and Ward are developing the Aeroscope software for iOS devices, at least for now. Lee claims that unlike the LabNation SmartScope, you won’t have to jailbreak your device to use the software. That’s critical, for would you jailbreak your iPhone or iPad to use a piece of test equipment? Lee didn’t rule out the possibility of developing Android or Windows versions, but for now it’s all iOS.

A necessity for iOS-based oscilloscope is pinch gestures for setting vertical and horizontal sensitivity. Lee confirmed that the Aeroscope will have that ability. In addition, the software will let you change offset settings by dragging your finger. You can also set up triggers by sliding a slide control with your finger. “If you don’t want to pinch to zoom,” said Lee, “you can still use traditional menus.”

Although Lee and Ward have designed the Aeroscope with one channel, you can have a single iOS device communicate with more than one unit. For the initial release, each unit’s data will display in the same screen but the waveforms will not appear in the same grid.

Next, I asked about the challenges of designing the hardware, getting it to work and getting it into the case. “The analog front end was the most challenging part,” said Lee. “The measurements had to be repeatable and the electronics had to meet our power budget. The form factor was also a challenge for us to find ICs small enough to fit and do the job.”