My family owns three cats; for the most part, they are well behaved – unless they are hungry. When it’s time for them to eat, they get a little crazy – constantly meowing and running under/bewteen our legs, or waking us up at night. 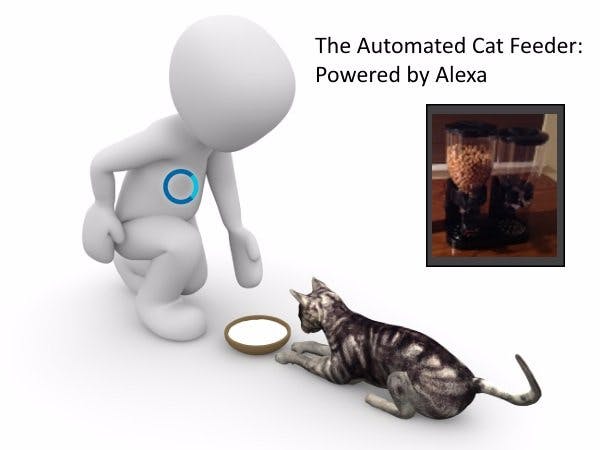 We used to keep extra food in their dishes, but they would just overeat – resulting in cat throw-up (which, without fail, I seemed to step in every morning on my way to the kitchen).

We’ve been living in this “claw-ful” situation for a few years, and never really considered resolving the problem, until I saw the re:Invent Alexa Skill contest sponsored by Capital One and Amazon Alexa. My oldest daughter suggested that we (and by we, she really meant me) build an automated cat feeder. I told her that I didn’t have the time to build one… but then, I figured, why not give it a try.

The Cat Feeder skill allows the user to:

Commands interact with the physical Cat Feeder using AWS IoT by sending messages to the device via MQTT or getting status of the feeder via device shadow (more on this in the technical sections).

Note – The above video does not show the cat joke intent (or passing the amount slot with the feed cat intent). See video below for demo.

The RPI feeder (inspired by David Bryan’s Automated Cat Feeder) executes the commands from the skill in the following manner:

Note – For those that are looking into building Alexa skills, please read and consider. Otherwise, skip this section to get to the “how to build/replicate” the skill.

I’ve published 4 or 5 Alexa skills – each slightly better than the previous one. I wanted to take my learnings from those activities and apply them to this skill. Here were my design principles:

Reuse-ability – I wanted to limit barriers to use this skill. For this skill, that meant:

Note: this section details how I built the Alexa skill.

This Alexa skill is somewhat advanced and uses multiple AWS “services” (in addition to Lambda). For those new to Alexa development, I suggest you start first with the Alexa getting started guide. If you’ve developed Alexa skills before, please continue.

The skill (written in node js) is build on the Alexa Skills Kits SDK for Node.js and requires the following code dependencies

One DynamoDB table is needed:

One S3 bucket is needed:

API key from APIUX to get day/night information based on zipcode (https://www.apixu.com/ )

Getting the idea The idea struck when we were working on centralized air conditioner monitoring system for one of our...