Called RioTboard, it is based around a 1GHz ARM Cortex-A9 core in a Freescale i.MX 6Solo microcontroller. 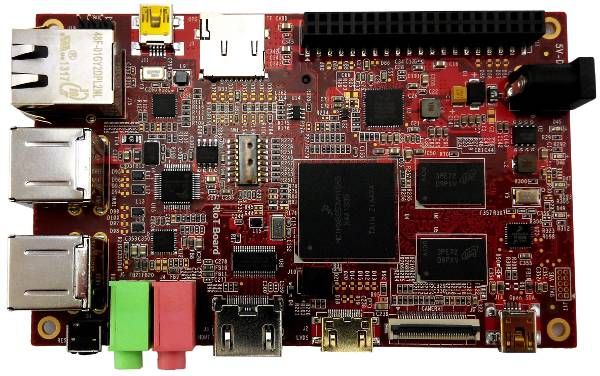 With its collection of peripherals and physical appearance, it looks very much like a Raspberry Pi, but Element 14 – which also sells Raspberry Pi – insists is is a different beast, aimed at Android product development rather than education and Linux.

“RIoTboard has been designed to run Android operating systems efficiently and features a processor with a broad range of peripherals and display capabilities, making it suited as a hub for the Internet of Things (IoT),” said the firm, also saying that it will run Linux, and low-power consumption was a key factor in the design.

Alongside the main application processor is an ARM Cortex-M4-based microcontroller (Freescale Kinetis K20 chip). Cortex-M4 is a DSP-enabled M3.

Element 14 describes the board as “open source”, and is setting up facilities for a community around it.

For more detail : Android development board has two ARM cores

Element14 has introduced a Hi-Fi add-on board for Raspberry Pi. Developed with Wolfson, it is based around the audio company’s...