Yes,we learned that we can take mobile phone camera modules from almost all mobile phones to inteface them with our advanced hobby electronics projects just as with any other standard add-on modules. Since this calls for an appropriate microcontroller, it is better to use Arduino or Raspberry Pi microcontroller as a utile platform.

Recently I’ve received a Raspberry Pi camera board. The camera, comes with a ribbon cable already attached to it,is a small size (25mm x 20mm x 9mm) board where a fixed focus 5MP camera module is attached. Part number of the camera module (from OmniVision) is OV5647. At the heart of the OV5647 camera module is a 1/4” color CMOS QSXGA (5 megapixel) image sensor with OmniBSI ™ technology. This Raspberry Pi camera module can be used to take high definition video, as well as stills photographs. It is easy to use for novices, but has plenty to offer advanced users looking to expand the knowledge. 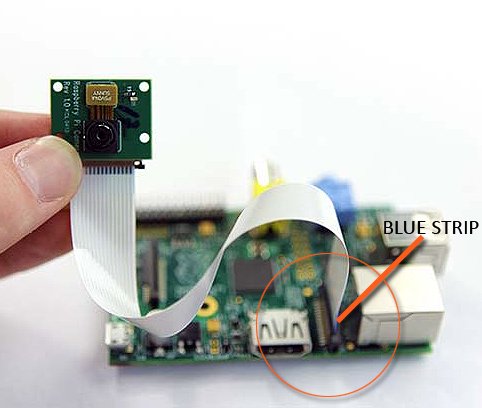 Raspberry PI comes with two first-rate connectors on board. One is between Ethernet and HDMI, and the other is near GPIO. The one closer to Ethernet connector is Camera Serial Interface (CSI ). This CSI is directly connected to the Raspberry Pi GPU which can process images without ARM intervention.

While connecting the camera module to the CSI port (located behind the Ethernet port) of the Raspberry Pi board,ensure that camera cable is inserted in right way, ie the blue strip in the flexible cable is towards the Ethernet (LAN) port. Once you are connected,enable the camera software, test the camera and try using it with Bash or Python. As I am a newbie in the Raspberry Pi world, I haven’t drudged enough into all features and capabilities of my borrowed Raspberry Pi (and the camera module). If you want to leap into the future of amazing possibilities, have a look at the documentation: http://www.raspberrypi.org/help/camera-module-setup/

The Raspberry Pi camera board transfers data through an extremely fast camera serial interface (CSI-2) bus directly to the system-on-chip (SoC) processor. It does this through a 15-pin ribbon cable, also known as flexible flat cable (FFC), and connects to the surface mount ZIF 15 socket in the Raspberry Pi board. As you may noted, the camera module on this official Raspberry Pi camera board is identical to the camera modules (ccd imagers) found in many mobile phones.

Luckily, most of the mobile phone cameras are not only MIPI compliant but also CSI compliant (see the first part of this article). The 15-pin Raspberry Pi CSI interface connector pinout is also included here to help you to keep proceed with your tinkering ideas. Note that, in Raspberry Pi, there are two flexible Flat Cable (FFC) connectors (S2 & S5). S2, near to the micro USB connector, is the Display Serial Interface (DSI). It allows low-level interfacing with LCDs and other displays with Raspberry Pi. It is a 15-pin surface mounted flexible flat connector, providing two data lanes, one clock lane, 3.3V and GND. S5, located between LAN and HDMI connector is the MIPI Camera Serial Interface 2 (CSI-2) connector for camera modules. It is a 15-pin surface mounted flat flexible connector, providing two data lines, one clock lane, bidirectional control interface compatible with I2C, 3.3V and GND. 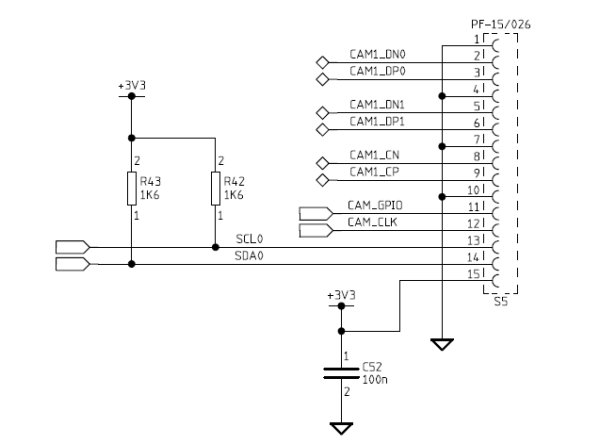 The data transmission interface in CSI is unidirectional differential serial interface with data and clock signals (the physical layer of this interface is the MIPI Alliance Standard for DPHY).

Adding a camera to your Arduino UNO is not very difficult, because ArduCAM ™ Shield is infront of you. You can find a good tutorial on ArduCAM here: http://www.arducam.com/tutorial/. This tutorial will demonstrate how to use the ArduCAM shield on Arduino UNO board, aim the point and press a snapshot button you will get a BMP picture saved on the SD/TF card!