To test the wiring we suggest you to use the ping/pong test you can find  in the RF24 libraries (both, of the raspberry and the arduino).

The connection between the Raspberry Pi and the NRF24l01+ module was a little bit tricky, so you have to double ( or triple) check the wiring before giving up. Here is the wiring scheme, the Raspberry Pi is a revision 2, and the module is the + (plus) version. 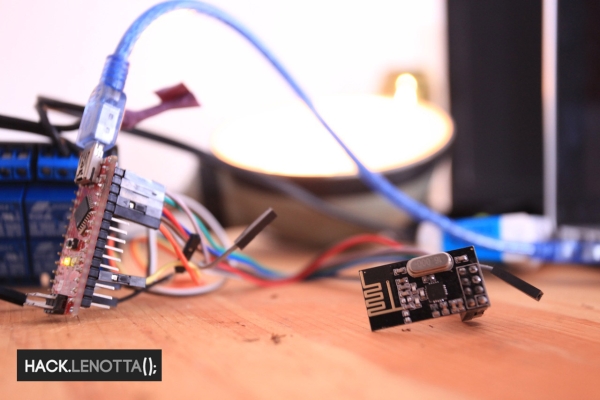 The setup is easy and similar to a mix of our tutorials about Irrigatorino and NRF24l01+ Tests.
Just keep in mind that you are playing with dangerous voltage, so if you get struck, it’s only your fault. I would suggest, anyway, to check if everything (especially the relay board) is working with a multimeter, before connecting to a real lamp.

Our plan to communicate between all this stuff is to use a Node.js application to run a binary ‘sudo ./remote  -m 81‘ and ‘sudo  ./remote -m 80‘  sending a message to the Arduino with the text 81 and 80 . The message is composed by pin identifier (8) and action to perform (0|1|2). After the action has been  read, all the other numbers identify the pin which the action refers to. 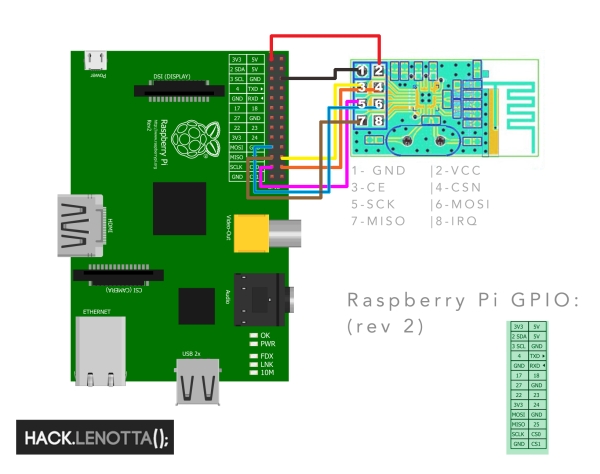 When the arduino receive it, it then sends back an acknowledgment packet to the raspberry with the same message (yeah, like a parrot), except for action 2, which will not perform any action, but will reply with actual state of the pin. In the meantime, if the message the arduino receive is 1  it will close a relay (turning on a light, like a good parrot), 0 will open it (I doubt a parrot could be so clever).

The sketch for the Arduino Nano is nothing more than a Getting Started demo of the RF24 library. We just modified it to switch the relay on in case it receive a message with 1 as text, or open it otherwise. Of course you’ll need the RF24 library to make it work.