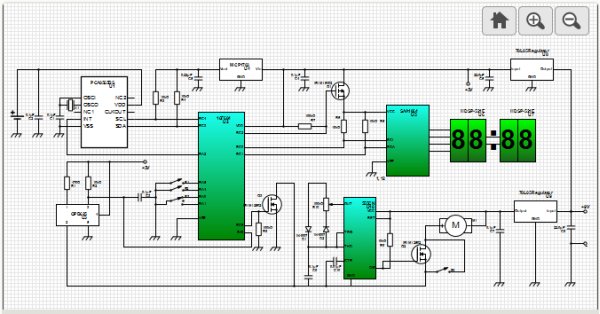 This project is an automatic pet feeding system using NXP Semiconductors’ PCA8565. The PCA8565 is a CMOS1 real time clock and calendar optimized for low power consumption. A programmable clock output, interrupt output and voltage-low detector are also provided. All address and data are transferred serially via a two-line bidirectional I2C-bus with a maximum bus speed of 400kbps. The built-in word address register is incremented automatically after each written or read data byte. It provides a year, month, day, weekday, hours, minutes and seconds based on a 32.768kHz quartz crystal. It features alarm and timer functions, low current, and extended operating temperature range of -40 degrees Celsius to +125 degrees Celsius. It further contains an 8-bit year register that can hold values from 00 to 99 in BCD format. It also compensates for leap years, thus leap year correction is automatic.

The electronic part of the device is just an alarm clock based on NXP PCA8565. The alarm initiates an interrupt that awakes the microcontroller. The later one sends a signal to the motor to control its forward and reverse mechanism. The dc motor must make a full turn and stop in the initial position to be ready for the next loading. This is achieved by an opto-interrupter OBP625, which provides a feedback to the microcontroller to stop powering the motor. The motor itself is controlled by PWM based on the timer IC in order to slow it down to a practical speed. The current time and the alarm time are displayed by a 4-digit LED display combined from two HDSP-521E 2-digit displays. Time to display is selected by a 3-state slider connected to pins RA0 and RA1 of PIC16F684. In the middle position of this switch both inputs are pulled up (internally). Two buttons at inputs RA4 and RA5 accomplish time setting and alarm setting. The LED display is controlled by SAA1064. The controller and PIC communicate via the I2C interface. The display is turned OFF after 10 seconds upon release of any button. This is achieved by simply turning OFF the controller and display power by a MOSFET IRLML6402 when the voltage on pin RC2 of PIC becomes 5V.

When I setup my Raspberry Pi server 8 months ago, one of its potential uses was for me to play...