Techbase has designed a Raspberry Pi Compute Module into a Linux-based “ModBerry” automation computer backed by an “iMod” cloud platform for remote control.

The computer-on-module version of the Raspberry Pi Compute Module, which began shipping this week, was anticipated by many, but perhaps nowhere so acutely as in Poland. First, we heard about A Sherlybox private cloud storage device based on the module from Polish startup Sher.ly, and now Gdansk-based industrial computer manufacturer Techbase has opened pre-orders for an automation computer called the ModBerry 500 based on the COM.

Farnell Element 14 and RS Components both released the Pi module as part of a development kit costing 126 Pounds ($215) and 142 Pounds ($241), respectively. The Raspberry Pi Compute Module Development Kit, which includes a separate baseboard, will be followed later this summer by the module on its own, which will be priced around $30 in quantities of 100, and slightly higher for single units. 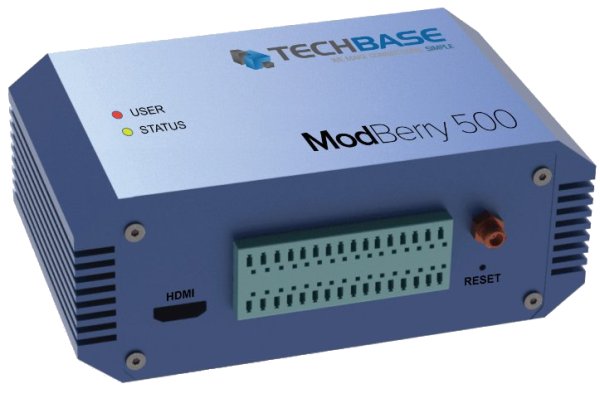 Techbase offers a number of Linux-based and Linux-ready industrial computers and automation controllers. Like the ModBerry, some of these, including the iMod-X1000 telemetry computer, are supported with the company’s cloud-based iMod, iModCloud, and iModWizard Software-as-a-Service (SaaS) applications. Whereas the Sherlybox creates a private crowd based on local storage, the iMod ecosystem allows data storage and control of various iMod compatible computers via a cloud platform.

The combination of the ModBerry 500 and the iMod software enables applications in the general automation market, intelligent buildings, as well as the monitoring and control of power stations, GSM base stations, and wind farms, says Techbase. The device can be set up as a protocol converter, data logger, telemetry module, server, PLC device, MODBUS router, SNMP agent, and much more.

The iMod system offers multi-leveled, user access cloud management based on configuration files. Thanks to the iModWizard, no programming knowledge is required, says Techbase. You can create different user profiles such as system designer, administrator, and end-user, and update software and configure services via iModCloud, says the company.

The iModCloud platform provides file management, notifications, and custom-based actions. Data visualization capabilities include maps that show the location of GPS-enabled devices. Access to the data is available via smartphones or tablets, and security is handled via SSL certificates and encrypted VPN communication.
Inside the ModBerry 500

Techbase builds on this foundation with a handful of real-world ports on one side, including a USB 2.0 host port, a 10/100 Ethernet port, a SIM card slot, audio out, and a programmable user button. On the other side there’s an HDMI port, a reset button, and a bank of pinouts supporting the remainder of the I/O.

Interfaces include a pair of RS-232 and RS-485 ports, respectively, as well as a CAN port and a 1-Wire bus. There are also a variety of digital inputs and outputs, as well as analog inputs. A second USB 2.0 port is available via an internal header. One or two PCI-Express expansion slots are also available.

Judging from the diagram above, there appears to be a lot of customization available, with Mini, Standard, and Max editions offering differing levels of I/O. We’ve listed the specs for the Max below.

Specifications listed for the ModBerry 500 Max include: 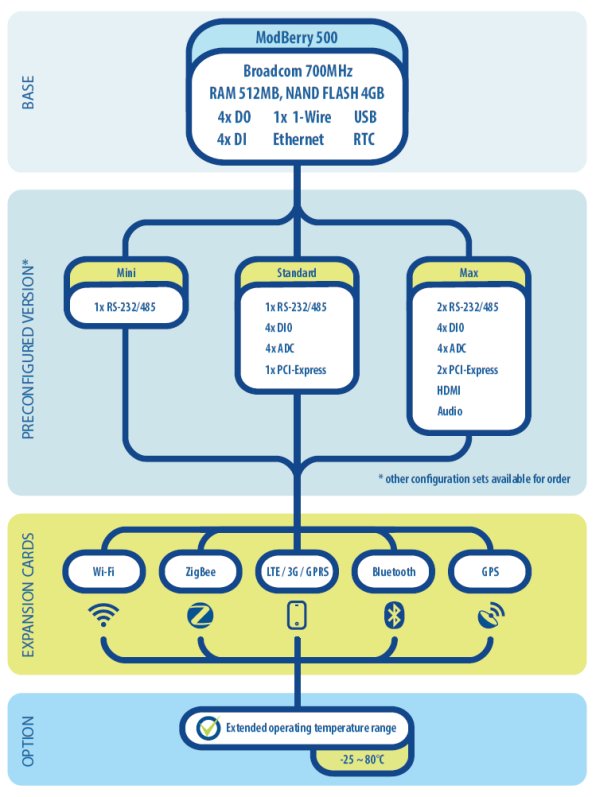 You can pick up one of these for under £30 Heavy Disclaimer Although the Raspberry Pi described here is super...