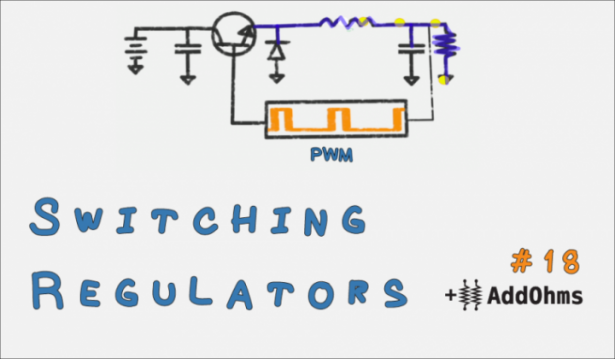 switching voltage regulator is one of my favorite circuits. In school, they were the first circuits I built where I understood how transistors worked. In fact, they were the first circuit I saw an inductor being useful! Switching regulators are incredibly efficient when designed properly. Of course, this detail about design is important. They are not as simple as a linear regulator, which is basically an IC and two caps.

To understand the basics of a switching regulator, I released AddOhms #18 this week. This is video tutorial dedicated the Switching Voltage Regulator. If video tutorials aren’t your thing, then keep reading for my written tutorial.

Linear regulators only need a small number of components, are simple to add to a board, but are not very efficient. Switching regulators can be made to be very efficient for a particular circuit, but can be difficult to design.

Back on AddOhms #17, we talked about how Linear Regulators work. In this tutorial, we are looking at switching regulators.

There are 4 core components needed in a switching voltage regulator.

Capacitors store energy in an electric field. When a voltage is applied, the capacitor charges up. When the voltage goes away, the capacitor discharges.

Switching voltage regulators work by making use of the energy storage properties of a capacitor and an inductor. To control the charge and discharge of these components, we use diodes and transistors.

As we discussed in AddOhms #8, diodes only allow current to flow in one direction. Later, we’ll see what that is important.

The switch or transistor used to control the regulator is why we call them “switching regulators.”

Now that we have all of the components let’s combine them together.

A buck converter, also called a step-down converter, will create an output voltage lower than its input voltage. This is similar to how linear regulators, like the LM7805, work.

In an ideal circuit, all of these components would have no power loss. In reality, these all burn a little bit of power, which is known as switching losses.

Build a Weather Station using Wia, Raspberry Pi and Node.js This simple device is the perfect way to demonstrate how...