BASICS OF THE SPI COMMUNICATION PROTOCOL

When you connect a microcontroller to a sensor, display, or other module, do you ever think about how the two devices talk to each other? What exactly are they saying? How are they able to understand each other?

SPI, I2C, and UART are quite a bit slower than protocols like USB, ethernet, Bluetooth, and WiFi, but they’re a lot more simple and use less hardware and system resources. SPI, I2C, and UART are ideal for communication between microcontrollers and between microcontrollers and sensors where large amounts of high speed data don’t need to be transferred.

Electronic devices talk to each other by sending bits of data through wires physically connected between devices. A bit is like a letter in a word, except instead of the 26 letters (in the English alphabet), a bit is binary and can only be a 1 or 0. Bits are transferred from one device to another by quick changes in voltage. In a system operating at 5 V, a 0 bit is communicated as a short pulse of 0 V, and a 1 bit is communicated by a short pulse of 5 V.

The bits of data can be transmitted either in parallel or serial form. In parallel communication, the bits of data are sent all at the same time, each through a separate wire. The following diagram shows the parallel transmission of the letter “C” in binary (01000011): 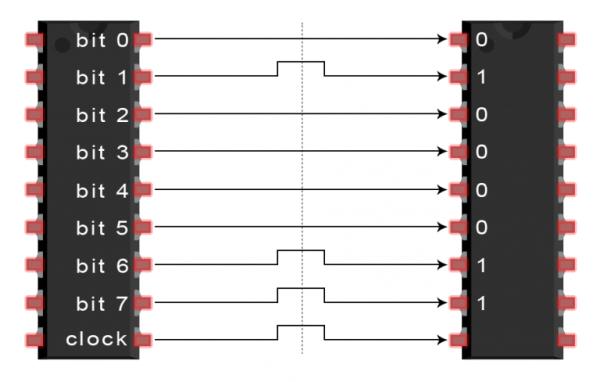 TVs are available to buy in truly huge sizes these days, and with 4K (and upwards) resolution, movies and TV...