So what motivated me to create this project? Retrogaming on the Pi is great with big screen TVs, but sometimes it is nice to bring back some of the nostalgia of “old school” gaming. Part of that nostalgia was playing video games on an old “black and white”…..that’s right “black and white” TV screen (especially during the Pong days). I don’t miss playing Pong on a black and white TV screen, but the look of the the “old school” buttons and knobs of the TVs I grew up with would sure be cool with some of the retrogaming apps that are currently available for the Raspberry Pi. In fact, having an “old school” cardboard TV screen stand for the Raspberry Pi would be a great discussion piece on anyone’s desk.

So let’s begin our instructable build with a parts list! 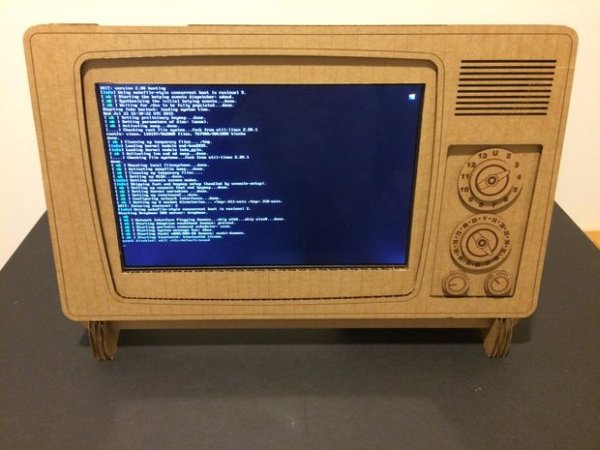 Step 1: Gathering Your Parts and Equipment

Step 3: Determining the hole placement for the HDMI Screen and HDMI Driver Board

This step explains how to mount the HDMI screen and driver board to the Retro TV back. I have included a template with holes that you can print to guide you in placing the holes on the back.

Step 4: Mount the HDMI Driver Board and Control Panel to the Back of the Cardboard TV

An exacto knife is needed to create the cardboard frame around the 10.1″ HDMI Display. I transformed the throw away pop out cardboard TV tube portion of this cardboard kit into a frame. As you are assembling the stand, make sure not to throw anything away until you have completed the build. You will need the TV screen tube pop out of the kit to create the inner frame of the TV. I first traced out the HDMI Display on this pop out, then cut out the square out with an exacto knife. Knowing my trace is actually the outside boarder of the 10.1″ screen, I adjusted my cut so the cutout extended onto the peel off adhesive portion of the screen. If you are interested in getting or creating a custom TV frame without having to do the cutout let me know. I can work on creating customized cardboard frames for those interested so you can avoid the exacto knife cutting process.