Last year’s release of the Raspberry Pi 3 Model A+ marked the end of an era: the next board, Raspberry Pi Foundation co-founder Eben Upton promised at the time, would be something dramatically different. 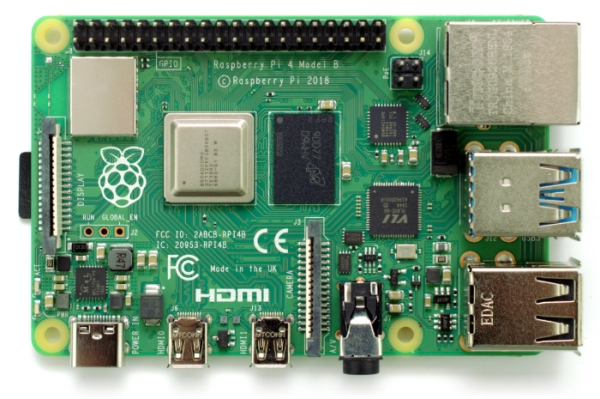 Now, a surprisingly short time later, Upton’s promise has been delivered: the Raspberry Pi 4 is a departure from the norm, and the first of a new generation of Raspberry Pi single-board computers. Gone is the old bottleneck of a single shared USB lane for everything connected to the SoC; gone too is the layout which has been with the boards since the Raspberry Pi Model B+.

Although appearing similar at first glance, the new board is slightly larger thanks to ports extending further from the PCB for improved case compatibility, the Ethernet and USB ports have been switched around, the power input is now a USB Type-C connector, and the full-size HDMI output has been swapped out for not one but two micro-HDMI connectors.

Internally, the SoC has been entirely overhauled. As well as getting rid of the bottleneck — the SoC now has around 5Gb/s of external bandwidth — there are USB 3.0 lanes for high-speed connectivity to external storage and accelerators, Cortex-A72 64-bit processing cores, a more powerful VideoCore VI graphics processor — the first Pi ever to use anything other than the VideoCore IV launched with the original Model B — and there’s enough grunt to drive two 4K-resolution displays as well as true gigabit Ethernet connectivity.

There’s a lot going on in the new Pi 4, including the first alteration to the Model B layout since the launch of the Raspberry Pi Model B+. Shifting the ports around has slightly increased the board’s footprint, as measured at its widest points including ports, and leaves the majority of cases incompatible. It is, however, measurably lighter than the Raspberry Pi 3 Model B+ at 46g to its predecessors’ 50g — likely aided by the loss of the full-size HDMI port.

Bridging the Raspberry Pi and the Arduino