Skip to content
U.S. Department of Energy’s Lawrence Berkeley National Laboratory (Berkeley Lab) has developed a way to assemble transistors based on the 2D materials graphene and molybdenum disulfide. 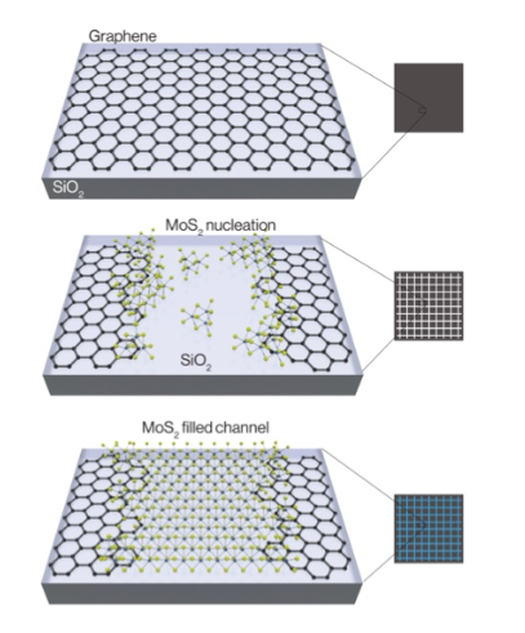 The method etches narrow channels in conducting graphene laid down on a silicon-dioxide substrate. These channels are then filled with a transition-metal dichalcogenide, or TMDC, or more specifically MoS2. Both of these materials have a 2D structure that is just one atomic layer thick. The synthesis method was able to cover an area a few centimeters long by a few a millimeters wide opening up the possibility of commercial-scale production in a wafer fab on a silicon wafer.

The use of two atomic sheets meet to form nanometer-scale junctions allows graphene to inject electrons into the conduction band of the MoS2 channel with improved performance compared with simply using metal contacts to inject electrons, the researchers said.

Schematic shows the chemical assembly of two-dimensional crystals. Graphene is first etched into channels and the TMDC molybdenum disulfide (MoS2) begins to nucleate around the edges and within the channel. On the edges, MoS2 slightly overlaps on top of the graphene. Finally, further growth results in MoS2 completely filling the channels. (Source: Berkeley Lab)

The research team assembled the transistor into the logic circuitry of an inverter underscoring its applicability to commercial IC production.

“Both of these two-dimensional crystals have been synthesized in the wafer scale in a way that is compatible with current semiconductor manufacturing. By integrating our technique with other growth systems, it’s possible that future computing can be done completely with atomically thin crystals,” said Mervin Zhao, a lead researcher and Ph.D. student at Berkeley Lab and UC Berkeley.