While most of my microcontroller designs run on 3.3 volts there is still the ocasional 5 volt design. Or I do something with an Arduino. So the need may arise to interface between logic working at different voltage levels. There are several ways of doing this, depending on your needs. Things are relatively simple as long as you know in advance which side is transmitting and which side is receiving. It gets more difficult if the communication is bi-directional or with busses such as I2C that are bi-directional by nature. I did a search on farnell.com and identified two chips that can translate between almost any two voltage levels bi-directionally. The Texas Instruments TXB0106 works with up to 6 CMOS (i.e. actively driven high or low) signals for protocols such as SPI. The PCA9306 (also from TI) is intended for protocols such as I2C that rely on pull-up resistors and where a line must never be actively driven high. 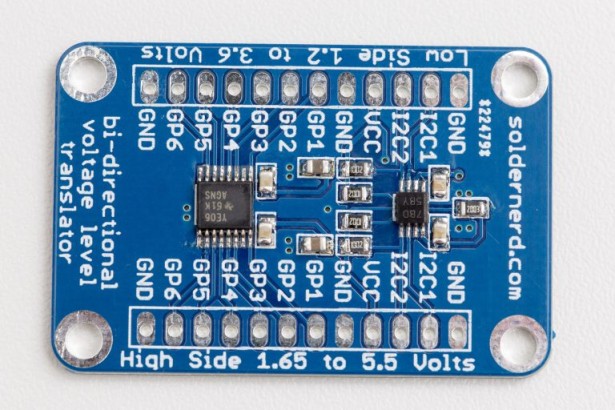 I ordered a few of these chips and laid out a simple board that contains the two chips together with the pull-up resistors and some decoupling caps. I also added two larger 10uF ceramic capacitors for a generous amount of bulk capacitance. The result is a tiny little board (45x30mm) that can universally be used to translate between almost any two logic voltages for almost any protocol.

I can think of a lot of situations where it could be useful. But the main reason for this project was to gain some experience with getting a PCB professionally manufactured by a board house. For several years I have done my own designs but I always milled and drilled them myself. This had pros and cons. I never had to worry about silk screens or solder masks because my boards never had any. On the other hand I suffered from the lack of plated-through holes. Vias were always a pain in the arse because I had to manually solder in pieces of wire to connect the two sides. And it was very difficult if not impossible to put a via below a component which made the layout challenging when working with ICs with many and/or tightly spaced pins.