During the week, all 8 of our blue tit chicks left the security of the nest box.

We have been away for a few days, so missed all the excitement, but have been able to catch up with the story, thanks to the video and data saved on the Raspberry Pi camera system.

We have not seen much of the blue tit family since we got back, but I did see about 6 of the chicks plus the two parents feeding in the apple tree this morning.

We have only been taking a close look at our nesting birds since 2009, but this season the blue tits seem to have been “running late” when compared to other years.

Nest building started about a week later than previous years. Once the nest was completed, the female appeared to take longer than I expected to lay her 9 eggs, and from hatch to exit took 21 days. 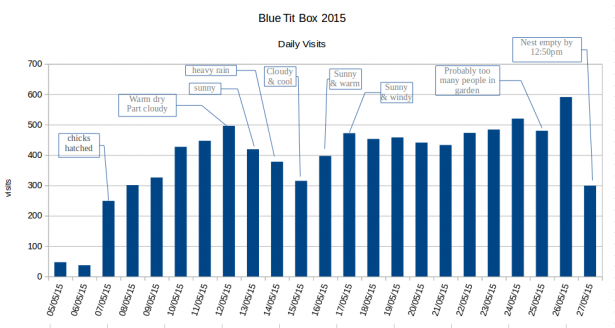 However, some of the important trees (like the hazel) didn’t seem to open their leaves until later. And we didn’t really see large numbers of green caterpillars (of the tortrix moth) being taken into the nest for the chicks. These caterpillars have been the main item on the menu in previous years.

From the bird box systems “motion” video clips, we were able to determine that chicks started to leave the nest at about 9:30am on Wednesday 27th May. With 7 of the 8 chicks gone by 10:15am, just one lonely and rather small chick remained.

At least one of the parents continued to feed this little chick until finally, just before 1pm, it took the plunge.

For those that delight in data

As my system logs data, I feel oblidged to chart it, and post it. So if, like Chris Packham, you love a good graph…

By taking the box counter values and dividing by 2, I hope to deduce the number of times the adults have gone in and out of the nest. However, this is not valid in the early days (especially before nest building starts) when the adults like to hang on the front of the box and just poke their heads in.

But once the chicks have hatched, the parents tend to go in and out to feed them, and not hang on the outside, which could attract the unwelcome attention of predators

The annotation showing weather conditions was an attempt to discover why the feeding rate appeared to drop from the 13th to 16th. Whatever it was, it does not appear to be anything to do with the weather.

Most of the time our garden is fairly peaceful. But on the 25th we had a family B-B-Q, and for a one hour period in the afternoon, the visits dropped to just 8. If it hadn’t have been for this disturbance, I’m sure they would have made over 500 visits on that day.

I thought I would also look at the peak hourly visits by day, and the average feeds per chick (i.e. visits divided by 8 chicks).

We can also calculate the average/chick over the feeding period. But I’m going to discount the first 2 days (the first was not a full day, and they hadn’t really got into the swing by the second), and the last 2 days (because the chicks started looking out through the hole and triggering the box sensor).

So my calculated average daily feed per chick is 55.

This seems a long way short of “a hundred caterpillars per day” which I think I saw on the BTO website.

If I just use the figures from 17th to the 25th on the basis that the chicks will eat more as they grow, then I get an average of 60. Hmm, maybe our chicks are under-nourished!

I then assembled a complete 3D model with all the necessary components.With the 3D model complete, I could then design...