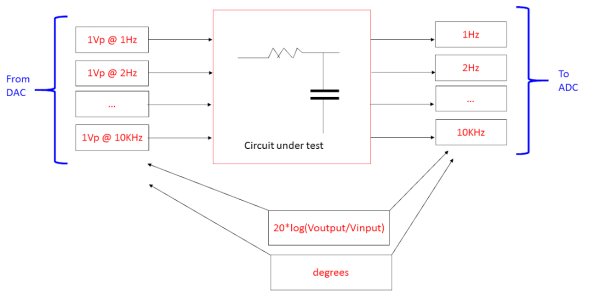 Each of these cosine wave (signal) are applied once at a time and the frequency (in Hz or rad/sec) is increased in linear order (called chirp). All the while the amplitude of sine wave is kept constant (at say 1V_peak). While the frequency can be increased in small steps (1Hz/ sec), the time required to complete the entire frequency range can be quite big. Hence, it is preferred to choose 20 frequencies/ decade. For example, I had chosen 05Hz, 1Hz, 1.5Hz, 2Hz, 2.5Hz… 10Hz.

Generation (output) and sampling (input or feedback) of Sine wave

Generation of cosine wave (and sine) waveform is pretty straight forward, using floating point device and DAC. Be aware that using the sin or cos function from standard “math.h” library takes a lot of time (because, it is designed to meet a certain resolution, by iterative process). Instead, I am using a sine table (of 2048 points of amplitude, over 0 to 2*pi rad). I kept the “sampling” frequency (for both DAC and ADC) at 200KHz. Keeping a fixed frequency is vital to any digital signal processing algorithm.

Now the complication, if different output frequencies are needed: –

Obviously, a straight forward approach of a single sine table will not suffice. Hence, I use a linear interpolation technique. If the angle is such that direct output is available from the 2048 sine table, the the value is directly used. For values of angle in between, the amplitude is arrived using linear interpolation of 2 nearby values. For higher frequencies, the points in sine table are skipped (and interpolated). A function is written, which take care of all these logic and outputs the amplitude for any angle needed.

I could have used external DDS chips such as AD9833, but knowing both the sine and cosine of signal being generated, makes the magnitude and phase detection simpler (explained later). If I had used externally (DDS) generated signal, then I would have known the “frequency” of output signal (by knowing the SPI command of frequency that I send to AD9833), but knowing the phase is impossible, without sampling. And then, we would have needed separate means to get 90-deg phase shifted waveform.