As with all DIY projects, one of the main hassles is the enclosure to put all of the hardware in. I wanted a quick solution – didn’t have the time to make something fancy. After a while I remembered that I’ve saved my Amazon Kindle Keyboard cardboard package. The quality of the cardboard is excellent and the construction is quite sturdy. After some measuring and layout prototyping I decided that it is quite good for this purpose so I began to work on my new NAS 🙂

After reviewing Raspberry Pi (model B) schematics and laying out my requirements I decided to power USB hard drive directly from the power supply unit. Raspberry Pi (model B) has 140 mA poly-fuse on each of the two USB ports while the current requirement of the USB hard drive is certainly higher. This particular USB hard drive (Transcend StoreJet 25M) has Toshiba MK5065GSX HDD inside and according to specifications it consumes 300 mA during read/write operations (and almost full 1 A during start-up!). Anyway, it’s safe to say that a single USB hard drive will consume max. 500 mA in general (as that is the max. allowable current on standard USB port). I also plan to add second hard drive eventually, so I’ll be needing 1 A for USB hard drives alone. According to wiki, Raspberry Pi (model B) requires ~700 mA of current for active operation so, all in all, I’ll be needing at least 1.7 A of current (2 A optimal). Unfortunately, I didn’t have any spare 5 V DC power supply with stated current capabilities so I decided to purchase one. I found Mean Well RS-25-5 (5 V at 5 A) switching power supply at my local electronics shop. This is one really stable power supply. I adjusted it’s output voltage to 5.05 V while it was unloaded. After I’ve loaded it with Raspberry Pi and USB hard drive the voltage stayed on exactly the same level – quite nice.
On picture 1, a schematic of all the necessary connections is displayed. Of course, in order to supply power from my new power supply, I had to cut one end of the USB-Micro cable and attach power conductors (Vcc and GND) directly to V+ and V- of the power supply unit (respectively). The same goes for USB hard drive. USB hard drive also requires connections to the Raspberry Pi board – but only the data lines (D+ and D-).

After a few days of sporadic “high-tech super-glue” cardboard modifications and quick electrical layout, the (almost) finished “device” can be seen on the following pictures. I say “almost” since I didn’t install power switch SW1 – quite frankly, I didn’t even remember to put it at the time I was assembling all this. I’m also thinking of adding soft turn-off mechanism (using Raspberry Pi’s GPIO) instead of SW1 – and will probably do that, we’ll see 🙂

After all the hardware assembly work was finished, I hooked up new Raspberry Pi NAS box to my LAN router, powered it up and began configuring the software.

I already had installed Raspbian “wheezy” on my SD card, so I continued with the configuration. I decided to set static IP address for Raspberry Pi (I chose 192.168.1.50). This can be done by editing /etc/network/interfaces on Raspberry Pi and adding following configuration:

If the first line is already present (i.e. iface eth0 inet dhcp) then it should be replaced with the above configuration. After this, networking service should be restarted

SSH connection will be broken after this step. However, Raspberry Pi should be available on the new address (192.168.1.50).
Since I don’t like IP addresses (from aesthetic point of view) I added more aesthetically pleasing hostname to /etc/hosts on my working machine 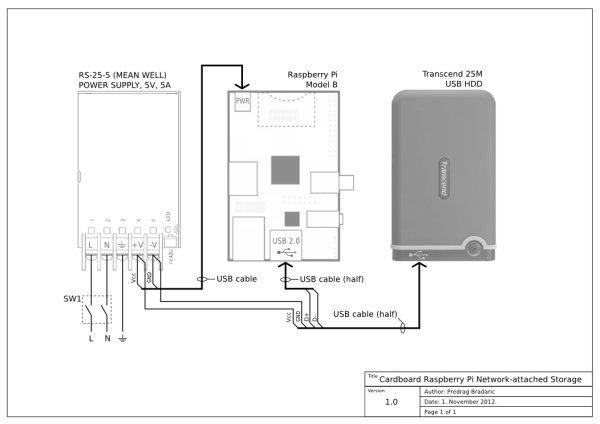 First step in mounting the USB hard drive is finding it in /dev. One way to find out which device is your target device is with fdisk:

By looking at the disk sizes I could deduce which one is my USB drive – highlighted line Disk /dev/sda: 500.1 GB, 500107862016 bytes indicates that this is 500 GB hard drive. Since USB hard drives can be partitioned like any other, all partitions of this device are listed further down. This hard drive has only one partition /dev/sda1. In order to mount it I first had to create a mounting point. I did that by creating empty folder in /mnt:

At this point I can access USB hard drive at /mnt/drive1:

Great, all is working 🙂
I now added this partition to /etc/fstab which will mount it at boot time (edited /etc/fstab on Raspberry Pi and added following line):

For more detail:  Build a network-attached storage (NAS) with your Raspberry Pi and an external USB hard drive.

Have you ever heard of an audio amplifier operating in Class-DG? Neither had I until I came across an unusual...