This Porta-Pi Arcade turns your Raspberry Pi in a mini arcade machine. Of course you could stuff any other retro console inside, but the RPi is so versatile, powerful and awesome that I stuck with it to build this mini arcade. 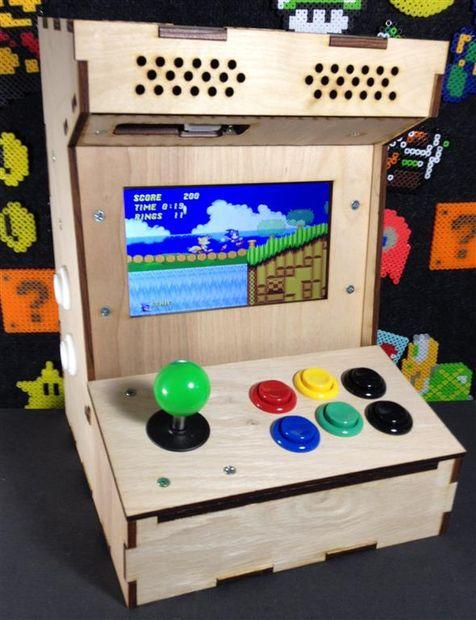 All running off a 5v 2A power supply!

Start with an idea, and test it out.

I started with a proof of concept shown above. I made this from 1/2″ plywood using a template I made with a cereal box. It was a little crude but I was proud of it, and everyone who saw this chunky machine loved it. I then, decided to make another one, but this time pour my heart into a new design. I also tried to engineer it so I could build another if I wanted… That was the hard part. 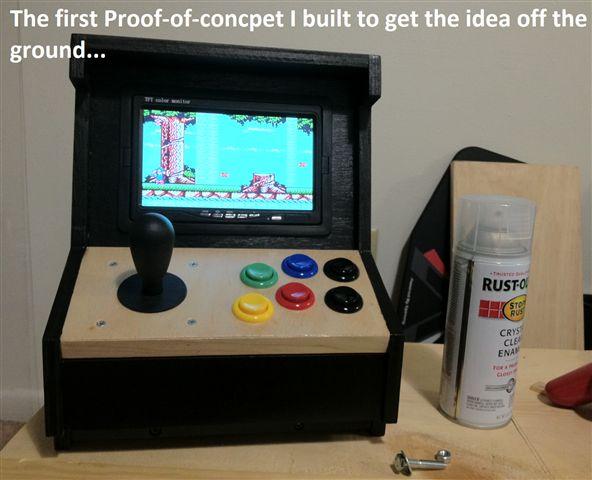 The cabinet design took over 200 hours of drafting, prototyping, and ‘improving’. But like any good design, the cabinet fits common off-the-self commercial arcade parts, an OEM 7″ tablet screen, and other common parts. This mini arcade can be laser cut, assembled, glued, and wired in under 8 hours. (I’ve built over 60 of these so far). Getting that build-an-arcade-in-a-day time took over 11 months of constant tinkering, designing, and engineering. A couple thousand hours of work over the course of 2 years. The video (next page) shows how the laser cut pieces are assembled (you can also build this design with 1/4″ acrylic plastic). The rest of the video shows how to install and wire the monitor, LCD driver board, speakers, amplifier, arcade buttons, 8 way joystick, and raspberry pi.

So what about the software?! The software was an entire other story that took months and months to figure out. Back in 2012 I started messing with Retro Pie (an awesome compilation of retro emulators with a slick front end for the Raspberry Pi computer). After months of troubleshooting and frustrating nights with Linux, I got a stable image with the code needed to run the arcade controls hardwired into the Raspberry Pi’s GPIO pins. I have the image available for download at my blog! You dont want to go through the headaches I went through; so I saved you the trouble 🙂 Be sure to stop by the petRockBlog and see their great work with RetroPie.

Download the BOM to see what items are needed to build this mini arcade.

For more detail: Build your own Mini Arcade Cabinet with Raspberry Pi