This tutorial brings you from start to finish in constructing your very own smartphone. You will start by 3D printing a case, then soldering printed circuit boards together, assembly, and finally installing a mobile OS onto your phone and using Python to make it yours. You can learn more about this project at hackaday.io/project/5083 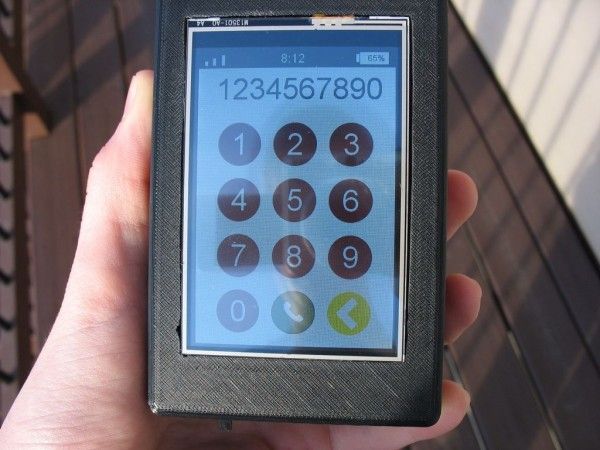 Lots of time and Patience

Before we begin, lets gather the components required for the build. You will need the following electronic components and PCBs:

While waiting for your parts to ship, you can 3D print the enclosure.

The smartphone consists of two 3D printed parts that make up the enclosure: The top and the bottom. Download the .stl files on thingiverse http://www.thingiverse.com/thing:752746. If you do not have access to a 3D printer, you can pay a company like Shapeways to do it for you. If you would like to customize the case to suit your needs, download the Solidworks files from my Github page.

Now lets start wiring everything together. In the Fritzing diagram, there is a Raspberry Pi. Instead of connecting to the Raspberry Pi, connect your wires to the 26 pin male header on the PiTFT. Now that we have that out of the way, lets start making connections.

WHILE TESTING, MAKE SURE YOU DO NOT PLUG IN A 5V MICRO USB. THE PI IS ALREADY BEING POWERED BY THE LITHIUM ION BATTERY

If you slide the slide switch the LEDs on the Power Boost should illuminate and the Raspberry Pi should power up. The PiTFT backlight should also turn on. If you have a PiTFT image on your Pi’s SD card the screen should also boot up. Otherwise, it will just stay solid white, which is just fine for now. Most likely, no LEDs will illuminate on the FONA. To turn on the FONA, hold in the Key button on the device for two seconds or pull GPIO 18 on the Raspberry Pi high for two seconds. If you can power the Pi, TFT, and FONA from the battery and turn it all off from a switch, you are ready for the next step.

Now that power connection are done, we can continue on to wiring up the UART to the Raspberry Pi, the speakers, and the microphone. Lets get started.

If you power everything on now, it should behave the same as it did in the last step. In the next step, we will be setting up the FONA by adding a SIM card making it capable of communicating over a cellular network.

Now that the wiring is complete, we can add a SIM card to make it possible for the FONA to communicate over a cellular network. The FONA uses 2G data networks, like T-Mobile. The FONA does not work with 3G or 4G networks. AT&T is planning to shut down their 2G network in 2016, so we will be using a T-Mobile SIM card activation kit. The FONA uses a standard SIM card, so a Micro or Nano SIM card will not fit. Once you have a card, activate it by following the steps at t-mobile.com/activate. When you are done, insert the card into your FONA and power everything on. If the red LED on the FONA is blinking every 3 seconds, your FONA is connected to a cellular network! In the next step, we will setup the software to get your Raspberry Pi communicating with the FONA.

For more Detail : Build Your Own Smartphone using Raspberry Pi

Back in late February I saw this post on the Raspberry Pi site. http://www.raspberrypi.org/school-weather-station-... They had created Raspberry Pi Weather...