I have an issue with smart-watches. Watches in general fall into one of two categories: a tool to tell the time, or a fashion statement. Increasingly, I believe the latter category is larger than the first. With the advent of the iWatch, Pebble and the like, fashion and making a statement has moved into technology. It’s not quite a new thing but nevertheless, it’s something I’m not too fond of. My solution? Make your own smartwatch.

There is a precedent for this. Steve Wozniack sports a pretty fly nixie tube watch. It’s pretty cool, but also a statement of sorts too. I believe there is quite an underground scene of custom electronics watches. I’ve been meaning to up my game with electronics anyway, so I’ve been working on a few initial prototypes. 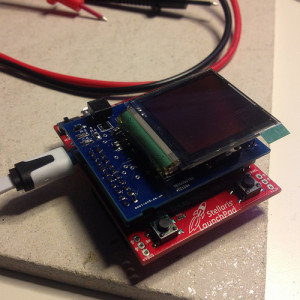 I use DesignSpark on the recommendation of a sparky friend of mine who has a successful business building bespoke electronics. I have a Stellaris Breakout Board – the same board used in the cubesats – that I figure I can use for development. Most of the parts I’ve ordered from R.S Components though that might change in the future. I’ve previously used EAGLE, which I’d also recommend.

I decided the first stage would be to build a breakout-board with the easy components attached. This includes a display, an SD Card, a small joystick button combo and a power supply for the OLED display. I’ve decided to go with a colour screen, the same used in the tricorder project, as it’s fairly cheap and works with an SPI interface. The SD card also has a straight forward interface, so I figured the only tricky part was the power supply.

The first board was a little large and sadly, didn’t work. I’d missed out a logic high line into the OLED driver chip. These boards I had made at seeed studios who you may remember I tried to visit on our recent trip across Russia and China. Sadly, the day we turned up in Shenzen was a Chinese public holiday. Oh well. The eagle-eyed amongst you will notice the wire I’ve hastily added in order to test whether or not I could save the board. Apparently not. In addition, the footprint for the SD Card reader wasn’t quite right, so that also needed adjustment.

For more detail: Building a SmartWatch