Can you use a Raspberry Pi for gaming?

Best answer: Yes. Raspberry Pi can be used for gaming, however because of its simple design, it’s best to run retro games. A Raspberry Pi won’t be running Elden Ring anytime soon. That said, it works as a great emulator for systems like the NES and N64. 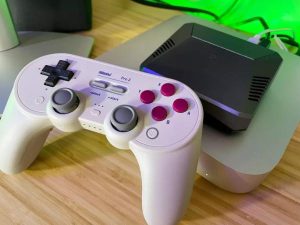 What is a Raspberry Pi?

A Raspberry Pi is a small, affordable single-board computer that can be plugged into a monitor. As the Raspberry Pi Foundation puts it, “It’s capable of doing everything you’d expect a desktop computer to do, from browsing the internet and playing high-definition video, to making spreadsheets, word-processing, and playing games.”

That said, because of its design, it won’t be able to compete with actual PCs in terms of CPU or GPU performance. The newest Raspberry Pi 4 features a Broadcom BCM2711 Quad core Cortex-A72 (ARM v8) 64-bit SoC @ 1.5GHz and supports up to 8GB of RAM depending on the model.

What games can be played on a Raspberry Pi?

There are few games that run on a Raspberry Pi without an emulator. Minecraft Pi, for instance, was developed specifically for Raspberry Pi devices. When you throw emulators into the mix, things get more interesting.

There are hundreds if not thousands of games that can be played on a Raspberry Pi through emulators. An emulator like RetroPie can emulate dozens of classic systems like the Atari 2600, Game Boy Advance, and even the PlayStation 2.

Should I play games on a Raspberry Pi?

You won’t be able to play high-end PC games on a Raspberry Pi, but it is perfect for playing retro games. In fact, it’s sometimes the best way to play older games. It can be difficult to find a working Commadore 64, for example, and even more difficult to find televisions or monitors that still support older plug-ins. The Raspberry Pi makes it much more accessible and the best Raspberry Pi kits average a little over $100.

In a time when game preservation is at the forefront of a lot of people’s minds and companies continue to close off older digital storefronts, the Raspberry Pi is an excellent tool to keep these games around with the help of emulators.

Source: Can you use a Raspberry Pi for gaming?