What to do with the small cardboard box full of Raspberry Pi related junk, besides watch it sit slowly collecting dust. Surely it should be doing something interesting? Failing that it could be a wifi radio, I suppose.

and a cardboard box 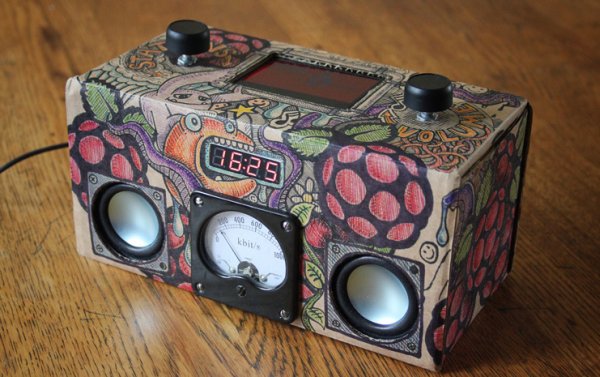 A long time ago I almost learnt C, well enough to wangle a job as a C programmer (not very well). I don’t know Python at all and, like everyone else in the world, I think I can write PHP. It’s decided then everything will be bodged together in badly written C accompanied by even more badly written PHP.

To set up, install (sudo apt-get you-know-the-rest) and edit the config file in /etc/mpd.conf

All we really need to change is the bind_to_address, set this to the RPi’s ip address. A little more fiddling is required to use the USB sound card, edit audio_output to use hw:1,0 instead of hw:0,0 in the config.

I created a playlist for every radio station I wanted to play. M3U playlists are stored in /var/lib/mpd/playlists At their most basic an M3U only needs to contain the URL of the the audio stream. For example XFM Manchester; URL http://ice-the.musicradio.com:80/XFMManchester pasted into an xfm_manchester.m3u in /var/lib/mpd/playlits

Now install an mpd client, funnily enough called mpc. With which we can :

All well and good except I want to listen to the BBC and their streaming URLs are awkward. Here’s a nice solution by Tim of Codeified to grab BBC stream URLs and save as M3Us for mpd : http://www.codedefied.co.uk/2011/12/24/playing-bbc-radio-streams-with-mpd/
Do things when we turn the knobs
I’m using two 2 bit rotary encoders. Datasheets are here. This wasn’t as straight forward as I’d hoped. After much faffing I stumbled on this solution : http://www.buxtronix.net/2011/10/rotary-encoders-done-properly.html Cut… Paste.

Left over from another project, a 4 digit 7 segment display hooked up to a MAX7219 driver. I’ve gone into detail on how I bodged this in another post. It displays the current system time, updated over NTP.

I thought it might be nice to show the current download rate on an old analogue volt meter. The original scale was scanned and altered in Photoshop before being printed and stuck to the reverse (It’s not totally ruined I can always flip it in future) of the plate. It’s connected to GPIO 18 which is set up as PWM_OUTPUT via Wiring Pi.

I parse /proc/net/dev/ every second pulling out wlan0’s bytes received, subtracting the previous value to get bytes that second then divide by 1000, er… multiply by 8 to get kbps (I think). I then make sure its less than 1000 (the maximum value on my scale) and divide by some magic number such that when sent to pin 18 it’s at to the correct position on my scale. Okay, it takes some fiddling but after all that it’s pretty accurate-ish. 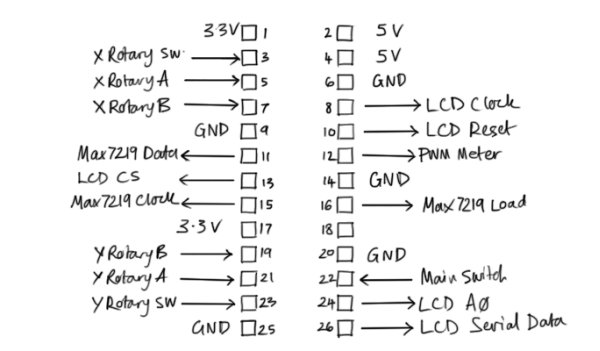 Then I made it play Nyan Cat

I intended to scrape html from the BBC station’s web sites for currently playing song title / artist, but I stumbled on some nice json feeds, the same feeds that the BBC use to update their own pages. 6 Music’s is here : http://polling.bbc.co.uk/radio/realtime/bbc_6music.json

Today I will show you how to use Estimcad CircuitDraw to create diagrams for electronics and robotics projects. This is...