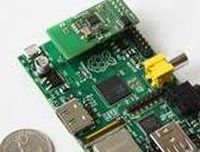 Called RaZberry (top of the picture), the hardware module pushes onto Raspberry Pi’s I/O connector. There is also a protocol stack and firmware, “as well as a license for Z-Way, which is the controller software that the Raspberry Pi requires in order to be able to read the Z-Wave wireless protocol”, said the Z-Wave Alliance.

The software provides users with an initial user interface demo, through which the functionality of the interface can be tested.

“It also includes a JSON (Java Script Object Notation) interface integrated into the software. JSON is a compact data format which provides both humans and machines with an easy to read text format, which makes it possible for programming novices to create their own user interfaces for iPhones, Android phones and web browsers,” claimed the Alliance.

Z-Wave is a proprietary (non-open-source) wireless mesh system operating in the 900MHz ISM band. Specifically tailored for home automation, it offers 40kbit/s maximum data throughput. “In the event of a broad-scale commercial deployment with a large number of components being connected, users can acquire additional Z-Way software licenses from Z-Wave.me,” said the Alliance.

There is Z-Wave-related open-source activity.

Inspired by similar projects online, I've been working with a neighbour to build a pair of coffee-table MAME-based retro gaming...