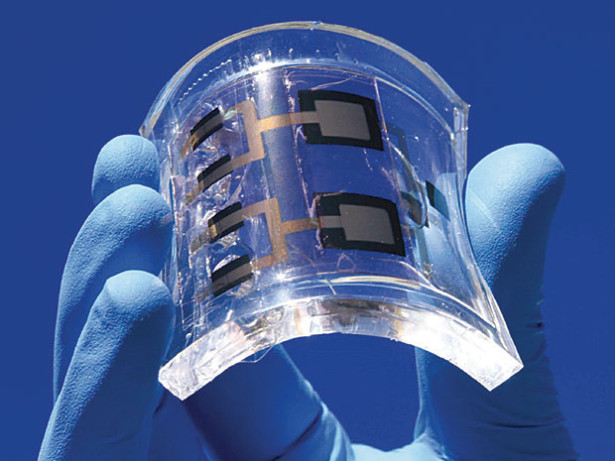 Whether they’re for sensors in artificial skin that demands flexibility or for wearable electronics where the circuits must withstand our sweat, silicon-based chips aren’t always up to the task.

Now, an international research team has developed a way to fabricate flexible, water-loving logic circuits and sensors without the need of semiconductors. Instead, what the researchers have done is coat gold nanoparticles with charged organic molecules to create a system that they’ve dubbed a “chemoelectronic circuit”.

The team—made up of scientists from the National Center for Nanoscience and Technology in Beijing, the University of North Carolina at Chapel Hill, United States-based comapny NuMat Technologies, and Ulsan National Institute of Science and Technology (UNIST) in South Korea—described the chemoelectronic components in the journal Nature Nanotechnology.

They constructed the chemoelectronic devices by coating gold nanoparticles with any of four types of organic molecules called ligands. Each ligand produces a different, charge-related effect when put in water or a humid environment. One dissolved, releasing a postive ion and leaving the nanoparticle surrounded in negative charge. Another had the opposite effect, making the nanoparticle positive and releasing a negative ion.

Combining the latter two types of metallic nanoparticle and oppositely-charged ligands creates a chemistry that simulates a semiconductor p-n junction. They packed positively charged nanoparticle complexes on one side and negatively charged particles on the other. The ions were free to move between them, with the positive ions attracted to the negative nanoparticles and vice versa. The result was a device with a built-in charge imbalance that leads to what is known as an interfacial voltage. The interfacial voltage creates a preference within the device for the transport of electrons in one direction, just like in regular diode.

“The ligands have around them free counterions,” explained Bartosz Grzybowski of UNIST, who led the research, in an e-mail interview with IEEE Spectrum. “The key point is then that these mobile counterions can move when [an electric] field is applied—this, in turn, sets up ionic gradients that ultimately control electron flow through the nanoparticles.”

For More Details: Chemoelectronics: Nanoparticle Diodes and Devices That Work When Wet