You can pick up one of these for under £30

Heavy Disclaimer Although the Raspberry Pi described here is super cheap, you will have to have some slightly specialized network equipment to do this. In particular you will need a VLAN aware network switch and a VLAN aware Wifi Access Point at a minimum. These used to be costly but are getting cheaper. I HIGHLY recommend the:

Q: OK so what exactly is this thing and what can I do with it?

A: Quite simply you will have absolute control of your kids’ network traffic while at the same time enjoying complete freedom of your own. It will be like having two separate internet connections to your home and you can say goodbye to slow downs whenever your kids are on you tube.

It allows you to do many cool things such as: All this can be done with free, libre, open source software and a cheap raspberry pi computer that you can get for under £30.00!

My network topology. We are only interested in the left hand side.[/caption] Note the left hand side of the above diagram and in particular the dashed blue line. This represents your children’s wireless network connection to the internet. Basically what we will be creating is known as a ‘One Armed Router’. It’s a router with only a single network port, yet it is able to capture traffic at the hardware level using the power of VLANs , and then change the traffic before spitting it out again. This happens in both directions effectively creating a sandbox. VLANs are used by ISP’s and enterprises; they are a way to have two or more networks sharing the same physical wires. The white circular object shown above is the Ubiquiti Unifi Wifi access point I described above. It allows you to create multiple separate wifi connections which is key because you can have a separate password for each and then give your kids their own wifi connection. All their traffic becomes the blue dashed line shown above and is sent to the Raspberry Pi by the switch yet your own green traffic passes freely through. You can even have your wifi connection completely hidden so that only the sandboxed connection shows up, this is also great for guests & strangers who want to use your internet because all your green network including your LAN (in my case) is completely separated

Q: OK I’m ready to do this. How do we get started? A: First of all you will need the following:-

1) Install Arch Linux onto the SD Card Instructions for this can be found here :- http://archlinuxarm.org/platforms/armv6/raspberry-pi

2) Boot up and Log in to your Raspberry Pi as root, either physically or via SSH. (If you use windows you can download a tool called PuTTY http://www.chiark.greenend.org.uk/~sgtatham/putty/ )

3) Set up your raspberry pi for VLAN.

5) Set up the iptables firewall to act as a Network Address Translation (NAT) router between the two virtual network cards.

6) Set up your hardware to VLAN tag the port your Pi is plugged into as VLAN ID = 32.

Refer to your manual. If you are using a Ubiquiti Toughswitch then you simply log into the switch, go to the VLANs tab and set the port to ‘T’ and the VLAN ID to 32 or whatever you chose your VLAN ID to be.

7) Set up your Wifi access point and create a separate SSID & Network on VLAN 32 (or whatever you chose as your tag). 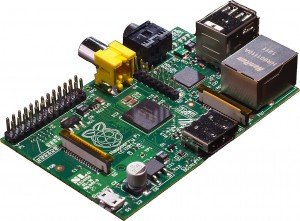 On the Ubiquiti Unifi this can be done through the management interface, simply create a network and set it’s VLAN ID to be the same. Make sure the port on the switch is similarly set up as the Pi with tag enabled on the port.

8) Enable a DHCP Server on your VLAN’d Raspberry Pi interface so that the kids get given an IP address from their sandboxed network (10.37.37.0).

Thats it!. You now have a sandboxed connection running through a separate network (10.13.37) and your kids have their own network on 10.13.37.0 which gets ‘N.A.T.’ted through the Raspberry Pi onto the normal network which then gets N.A.T.ted again and out onto the public internet. Double firewall.

Drop me a mention on twitter @cedeon if you need any help!.

Now you have the basic functionality set up you can do lots of cool things with it. I’ll leave it up to your imagination but here are a few ideas:

Detecting Lightning with a Raspberry Pi

rious methods can be used to detect lightning. Commonly it involves sensing the electromagnetic radiation generated by a strike. Most people have...