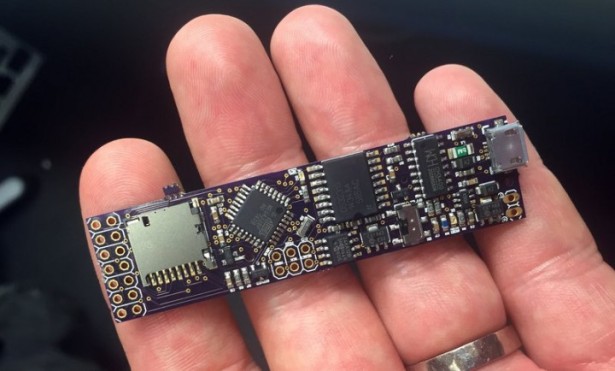 I actually helped to make the board in the picture above. And it was awesome fun.

The board is designed to monitor the conductivity (and, possibly, contamination) of water in lakes and streams, with the wonderful feature that it fits through the mouth of a regular water bottle. It’s called Riffle and it is the brainchild of Don Blair, who’s working with Public Lab and the MIT Center for Civic Media. This week I had the honor of working with Don at MIT.

I first heard of Riffle during a “citizen science” presentation at a Personal Democracy Forum session last year and was immediately struck by the concept — an Arduino-based computer slipped into a water bottle and submerged in stream or lake to monitor conductivity, temperature and turbidity.

The idea stuck with me, and I did some digging into whether I could get one. No dice; it was still in development.

Months later, I was asked to teach a “sensor journalism” class this autumn at West Virginia University. It would explore the possibilities and pitfalls of using do-it-yourself, untested data-collection projects for journalism. Experimenting would be part of the story — learning from failure as well as from success.

I reached out to Don, who said he was in the final stages of designing and building a deployable version of Riffle. He hoped to make a bunch of Riffle boards this summer, and warned that they’d need field testing to determine how well they worked in the wild — if at all.

Don designed Riffle’s brain using Eagle PCB Design Software, which is like PhotoShop for circuit boards. In the same way I’ve used snippets of open-source code to cobble together programming projects, he’s been using open-source circuits to cobble together Riffle — essentially placing an Arduino, a real-time clock and an mini-SD card together on one narrow board.

The files look like this. (And his Eagle files on the Riffle Github page).

When he’s ready to turn a virtual design into a physical board, he uploads the Eagle file to a site like OSH Park. A couple of weeks later, the boards show up in the mail.

The Eagle software also spits out a list of parts Don needs to solder onto the board, which he orders from Digikey. Then it’s a matter of putting it all together.

I think Don was a little surprised when I offered to travel from New York to Boston and help him build the boards. But he enthusiastically welcomed me up, and I’m so glad he did.

With fresh boards and exceptionally tiny parts in hand, we headed upstairs to the workshop of the MIT Responsive Environments Group, where folks have been helping Don build circuit boards.

First Don used a “flux” pen to polish all of the tiny gold contacts, or “pads,” on the board. And by tiny, I mean smaller than a pinhead. Some of them are half that size, at best.

Next we needed to get solder paste on every pad. A syringe full of paste is connected to an air pump and a foot pedal, and that helps you place tiny drops on the gold pads.

Then all the little parts have to be placed on the board with tweezers. Some of these things are the size of sesame seeds. The paste holds them in place a bit, but not securely by any means. One false thumb move and you have a mess.

This is excruciatingly tricky, requiring a steady hand and good vision (or a big magnifying glass). It’s also high-stakes; in most cases if you put a part on backwards, the board is bum.

To seal the deal, we needed to melt the solder — not with a soldering iron, but with an iron-hot blow-dryer!