From a performance standpoint we know building a homebrew Raspberry Pi cluster doesn’t make a lot of sense, as even a fairly run of the mill desktop x86 machine is sure to run circles around it. That said, there’s an argument to be made that rigging up a dozen little Linux boards gives you a compact and affordable playground to experiment with things like parallel computing and load balancing. Is it a perfect argument? Not really. But if you’re anything like us, the whole thing starts making a lot more sense when you realize your cluster of Pi Zeros can be built to look like the iconic Cray-1 supercomputer. 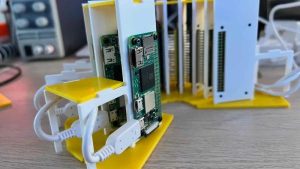 This clever 3D printed enclosure comes from [Kevin McAleer], who says he was looking to learn more about deploying software using Ansible, Docker, Flask, and other modern frameworks with fancy sounding names. After somehow managing to purchase a dozen Raspberry Pi Zero 2s, he needed a way to keep them all in a tidy package. Beyond looking fantastically cool, the symmetrical design of the Cray-1 allowed him to design his miniature version in such a way that each individual wedge is made up of the same identical  set of 3D printed parts.

In the video after the break, [Kevin] explains some of the variations the design went through. We appreciate his initial goal of making it so you didn’t need any additional hardware to assemble the thing, but in the end you’ll need to pick up some M2.5 standoffs and matching screws if you want to build one yourself. We particularly like how you can hide all the USB power cables inside the lower “cushion” area with the help of some 90-degree cables, leaving the center core open.

This isn’t the first time we’ve seen somebody build their own tiny Cray-1. A particularly dedicated hacker built his own 1/10th scale replica of the 1970s supercomputer powered by an FPGA back in 2010, and eventually got to the point of trying to boot original software on it.

For a while now, we have witnessed the use of wireless charging, by placing a phone or other devices that...