I created a simple test sketch (program) for the Arduino that would wait for a command then take action once one was received. The complete sketch can be found here. 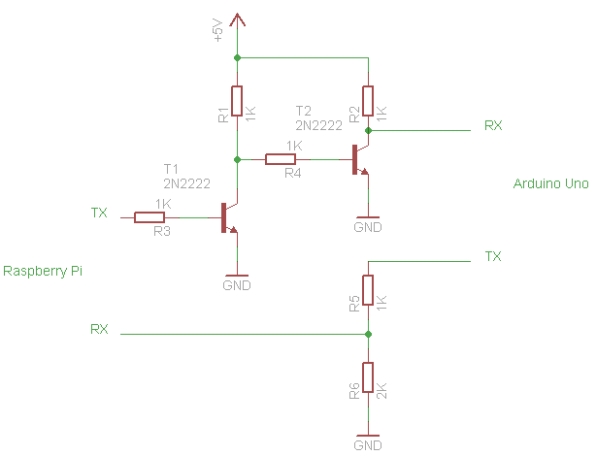 I‘m using a 2N2222 transistor connected in a common emitter mode configuration to amplify the 3.3v from the Pi to 5v. However this configuration has the undesired side effect of inverting the signal. When the 3.3v input is high, the 5v output is low. So I‘ve added a second transistor to invert the signal back to its original state.

To lower the 5v from the Arduino I‘m using a simple voltage divider. In theory I could use any value of resistors as long as R6 is twice the value of R5 I will get two thirds of the input voltage at the output. Two thirds of 5v just so happens to be 3.3v, perfect.

For more detail: Communicating over serial between Raspberry Pi and Arduino.

How To Boot Raspberry Pi With NOOBS

In case you don't know, the raspberry Pi is a credit card sized computer. It was originally created to help...