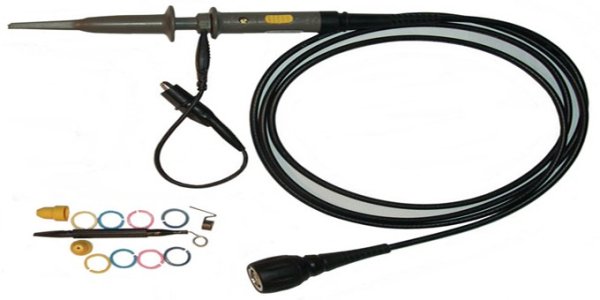 Using simple wires to measure signals with the oscilloscope would result in unreadable plots on the scope, the main reason being the noise coupled onto the “probe” itself. The first line of defense against that would be to use a coaxial cable as a probe, which would prevent external noise coupling.

An unwanted deterioration of the measured signal is due to the capacitive loading that such a piece of cable adds to the signal. An equivalent schematic of an IC to IC signal is illustrated in figure 1.The non-zero output resistance of the signal source is modeled, as well as the input capacitance of the load. As it can be observed in the plot of figure 2, for a 2MHz square waveforms, both the signal at the output of the source and at the input of the load are practically identical.However, there are some problems if you connect a 1x probe of an oscilloscope (which is basically a piece of coaxial cable) in an attempt to measure the signal. Due to the relatively large capacitance of the coaxial cable, an additional capacitive load is placed on the signal line. Assuming a 1 meter long probe, and taking into account that the capacitance of a coaxial cable is about 90pF/meter, the equivalent schematic in figure 3 can show us the degradation of the signal (both at the load and measured on the scope).As it can be seen in the plot of figure 4, the non-zero output resistance of the signal source, together with the additional capacitance of the coaxial cable and that of the oscilloscope itself, form a severe RC filter which seriously deteriorates the signal on the line.Things become even worse if higher frequency signals are to be measured. For instance, trying to measure a 10MHz signal (so just 5 times higher frequency than in the previous example) in this manner will lead to seeing almost a triangle waveform on the oscilloscopeAttempts to reduce this effect have been directed towards decreasing the capacitance of the coaxial cable. Hence, actual oscilloscope probes are actually made of special coaxial cable, with very thin inner conductor, so that the equivalent overlapping surface between the inner conductor and the shield itself is decreased. In addition also the distance between the inner conductor and the shield itself increases, leading to smaller parasitic capacitance of the probe .