I need to be able to control turning on and off an RGB LED utilizing the Raspberry Pi.  I also should be able to turn it on and off using an Android device.

The design is made up to utilize three different components: Raspberry Pi / LED Hardware, Web Service, and Android device. 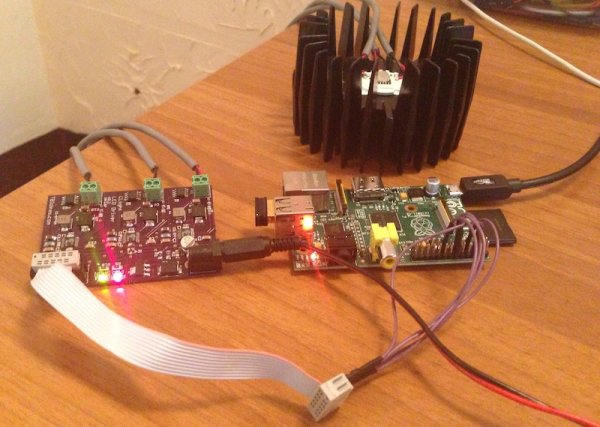 All the gear that was used was:

Some of the constraints I also have to work with are: 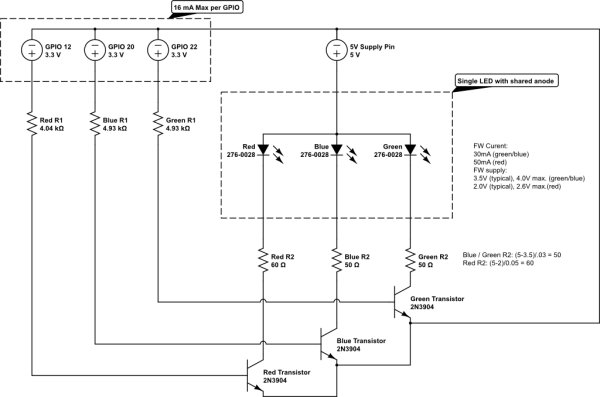 The R1 resistors are a complete bit of voodoo to me.  I just don’t know enough to do the calculations correctly, so I know they are under powered.  I also took readings and they are no where near high enough to be a concern.  The best I could come up with was that the β / H(fe) for each is about 60 or 54.  That is probably wrong though, but I’m not sure how to follow the white sheet correctly.  I also wasn’t sure what or how to find what the voltage drop is (I hear .7V or .9V), which goes into the calculation.  I checked with the multimeter afterwards and all pieces were very low.

To handle allowing an android device to turn the LED on and off, I needed to create a web service that runs on the Raspberry Pi that would allow easy operations to occur.  Due to the fact that I needed to stay a little more light weight, not to mention I wanted to learn Python, I wrote the quick REST service using Python.  To get the work done, I used the following libraries / packages:

I utilized Flask to quickly prototype up a REST service and inside that service, I’m using the gpio-python to handle turning on and off the GPIO pins.

I did go through this quick, so the REST service really isn’t pretty.  It should handle cleanup still and also considerations if it is used in a multi-threaded fashion for keeping track of resource setup, teardown, and usage.

The LED colors are red, green, or blue.  The response code is just plain old text.

Nothing special here.  Just used the Android SDK and Eclipse.  I then used a Nexus 7 to handle playing with it.  Again, this should have been done a little different if real life, but for now it was quicker to use AsyncTask.  As long as I don’t turn it before I get a response (really hard to do), then I am fine.  There are different opinions on the correct way, which is either an invisible fragment or using a command system to a service running in the background (I prefer the latter, but more complex).

Source: Controlling a RGB LED attached to a Raspberry Pi through Android

I received my long-expected Raspberry Pi a few days ago. I just couldn't wait to try out my crazy ideas...