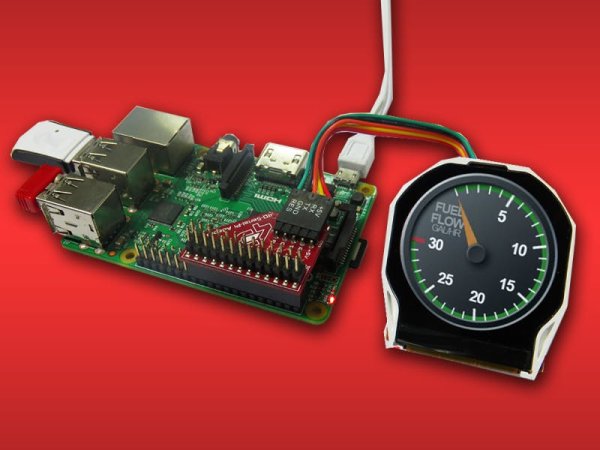 This program is tested on Raspberry Pi 2 with Pixel image. It can also run on other Raspberry Pi variants. But, if you are using Raspberry Pi 3, make sure that you first visit this link: https://www.raspberrypi.org/forums/viewtopic.php?f=63&t=151454 to configure the UART of Raspberry Pi 3.

This demo was tested on a Raspberry Pi 2 running Raspbian with PIXEL. It can also run on other Raspberry Pi variants. However, if you are using the Raspberry Pi 3, make sure to visit this link first to properly configure the UART port:

The widgets on the uLCD-220RD were created using the ViSi-Genie environment in Workshop4. ViSi-Genie is an environment that allows users to create GUIs (Graphical User Interface) by drag-and-drop method. The ViSi-Genie project file for this demo can be found inside the attached zip file – “ViSi-Genie-RaspPi-Demo-220RD.zip”.

To get started, download and install the Worskhop4 IDE from the 4D Systems website, then open the attached project.

Extract the attached zip file to a folder then open the ViSi-Genie project “demo1”, as shown below.

After opening the project file, go to the Project menu and make sure that the Comms Speed and Display parameters are correct as shown below. 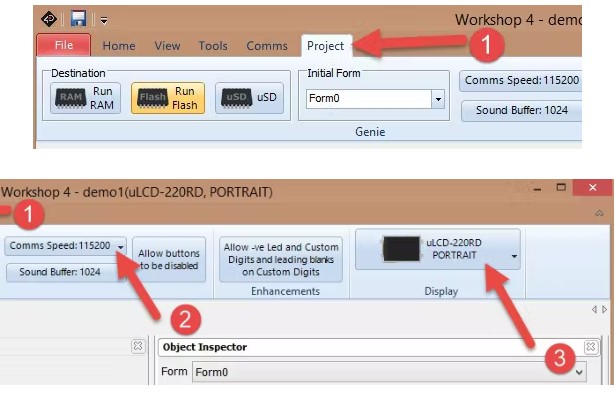 Connect the uLCD-220RD to the PC

Now connect the uLCD-220RD to the uUSB-PA5, then the uUSB-PA5 to a USB port of your PC using a mini-USB cable. 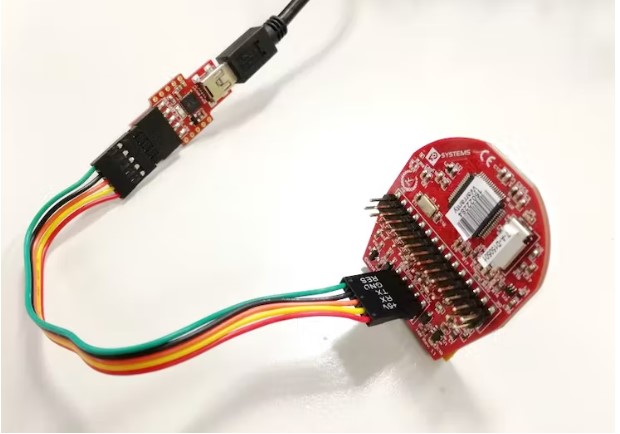 Now go to the Comms Menu and select the correct COM port for the uUSB-PA5, then click on the red button, as shown below. 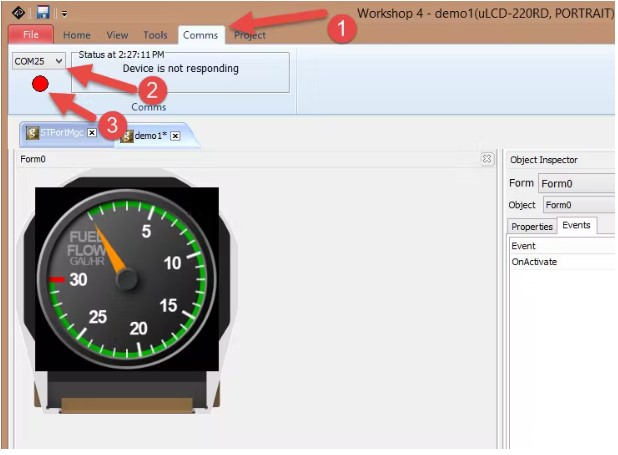 If the uLCD-220RD is properly connected to the PC, the red button should now turn blue, and the name of the display module should be displayed, as shown below.

At this point, mount the uSD card to the PC using a uSD card reader or adaptor. Go to the Home menu and click on the (Build) Copy/Load button, as shown below. 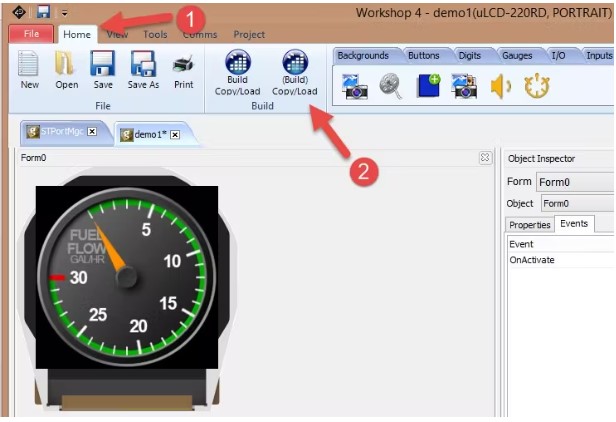 The project should now start the build and compile the process. 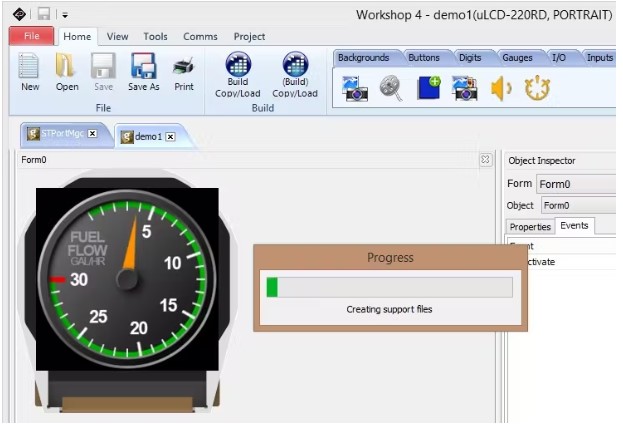 Worshop4 will prompt for the correct drive for the uSD card. Select the appropriate drive from the drop-down menu. 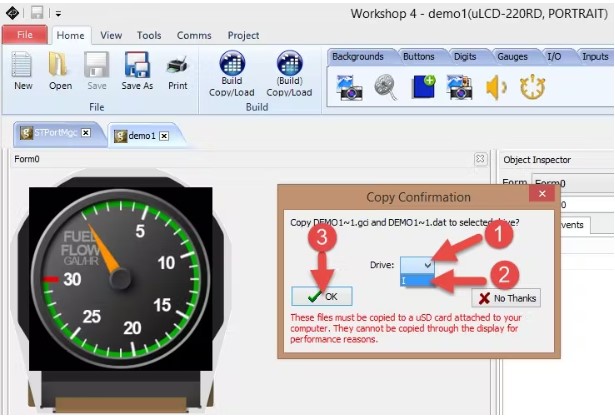 Workshop4 will then compile the source code and download the program to the flash memory of the uLCD-220RD. 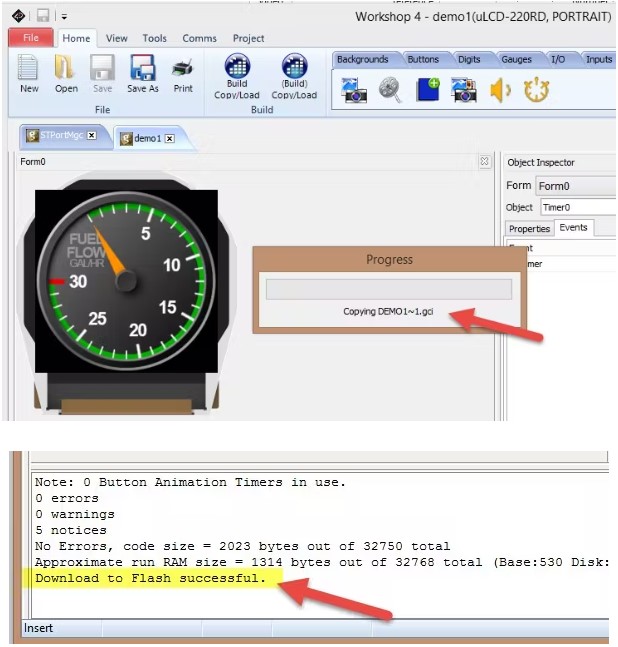 The Raspberry Pi must now run a program, which will communicate with the uLCD-220RD. The source code for the program is attached. To be able to compile the source code on the Raspberry Pi, you need to install first the ViSi-Genie-RaspPi-Library, which can be downloaded from this link:

Follow the instructions on how to install the library on that link.

Connect the Raspberry Pi to the uLCD-220RD 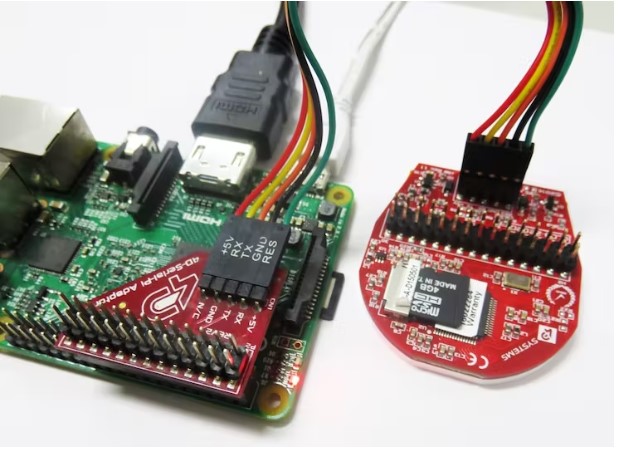 After installing the library and connecting the hardware, you can now compile the source code and run the program on the Raspberry Pi. Follow the procedure below.

The uLCD-220RD should now start displaying the different widgets, according to the serial commands received from the Raspberry Pi host. 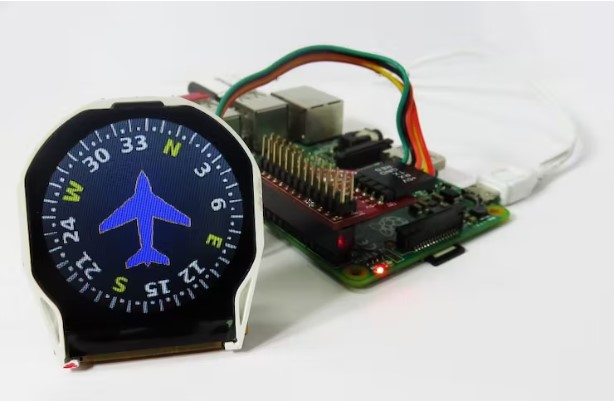 Biosensors for consumer wearable devices is a new trend as it facilitates multiplexed physiological monitoring for quantitative assessment of body...