When I wrote my new book Make: Minecraft for Makers, you know I had to include a monster Creeper project. Here’s how you can build a motorized Creeper, with a metal skeleton and wooden skin. Aside from the fact that this thing most certainly doesn’t blow up, you’ll love it, and you’ll learn a lot about robotics and Arduino along the way. Let’s get to it!

The Creeper consists of a robot chassis kit with add-on parts creating the mob’s distinctive armless body, with a servo motor to move the head around. Begin by taking a look at the Creeper in-game. Just be sure to stick to Creative mode or you may find yourself getting blown up! 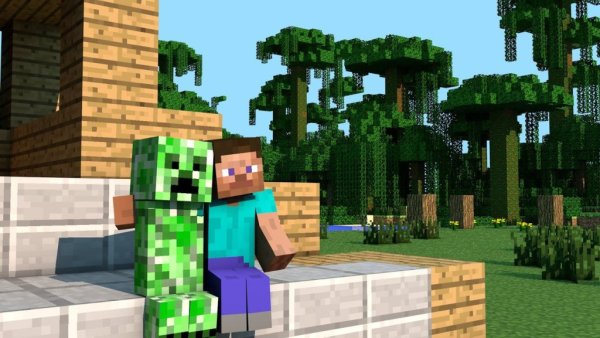 The Creeper has a cubical head 8 pixels on a side, a 4×8×12 body, and four 4×8×4 legs. It’s actually a pretty elegant design, which makes it a breeze for building a physical re-creation.

The Robot Creeper seems super challenging at first. The thing has to look like a Creeper, ideally proportionate with the game element. At the same time, it also has to function as a robot. In other words, regardless of its outer appearance, the Creeper has to be able to fit all the necessary robotic components, particularly the chassis kit we’re using for the base.

I began with the Actobotics Bogie Runt Rover, a kit available for around $70 that comes with a chassis, six motors, and six wheels. The assembled rover’s chassis measures 6″×9″, though the wheels project a little, and it rides fairly high: 6″ off the ground. With those measurements I was able to decide the size of the footprint: 12″×8″ — conveniently, one inch per pixel. 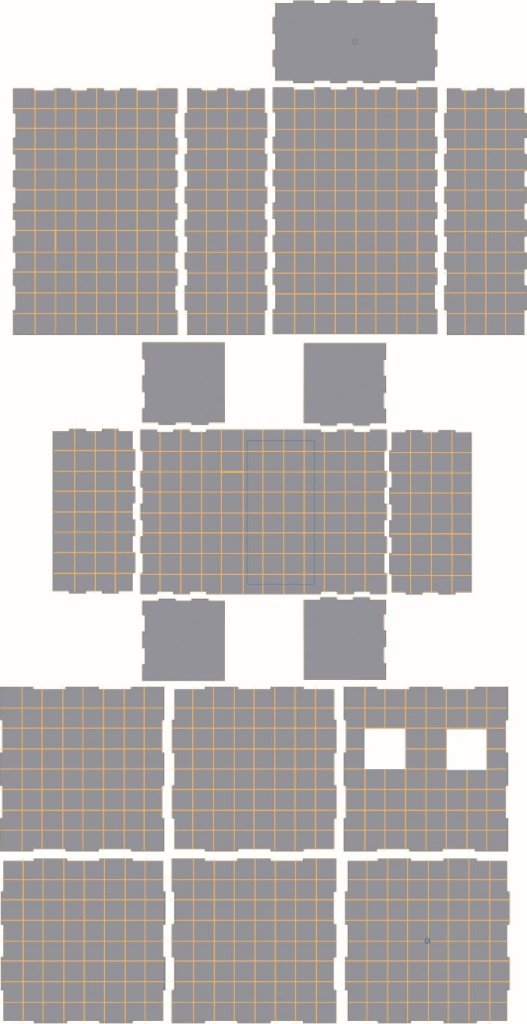 Applying the one-inch scale across the whole robot makes for a 12″-high, 8″-wide, and 4″-deep body, an 8″ cubical head, as well as four legs 6″×4″×4″. However, for the legs I decided to merge the front pair and back pair into 8″-wide blocks — the thing is going to roll, not walk. The image above shows my final design. I created vector files to be used on a laser cutter, but you could simply cut the pieces from wood, or get creative with other materials — recycle those Amazon boxes and use some packing tape to knock out a cheap, simplified version.

Next, we need to design the robot’s electronics. What will be its functionality? How will it be controlled? The Minecraft Creeper is known for blowing up, and clearly that was out. It also turns its head, and we can do that by putting a servo motor inside the body to turn our robot’s head. The Creeper also has eyes that turn red when it’s about to explode. That’s easy! We’ll put NeoPixel Jewels in the head.

Under the hood I stuck with the classic Arduino Uno, with a motor control shield sitting on top. This add-on board helps the Arduino manage the high voltages needed to run motors, and it simplifies controlling them. 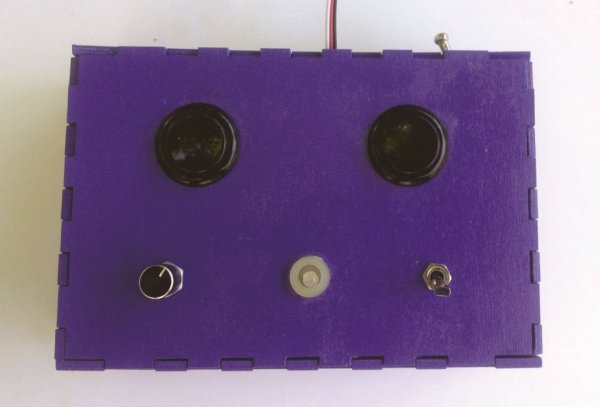 Speaking of control, I’m making a basic controllerthat connects to the robot via a trio of wires. 2. ADD THE BODY BASE

Attach one 3¾” piece of channel to the center set of mounting holes on the rover, using a large square screw plate and four screws added from the underside. 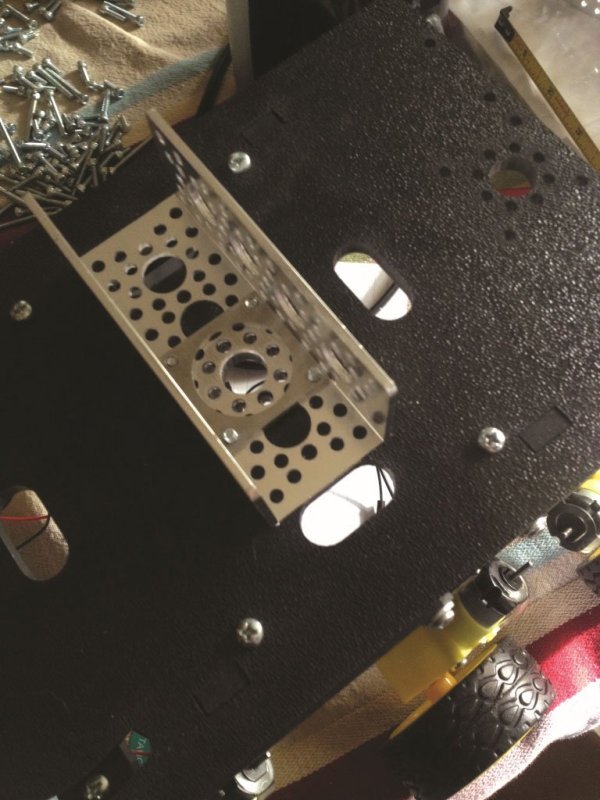 Use the standard servo plate to attach the servo motor to the channel. While you’re at it, you can attach the coupler that attaches the servo’s shaft to the D-rod. 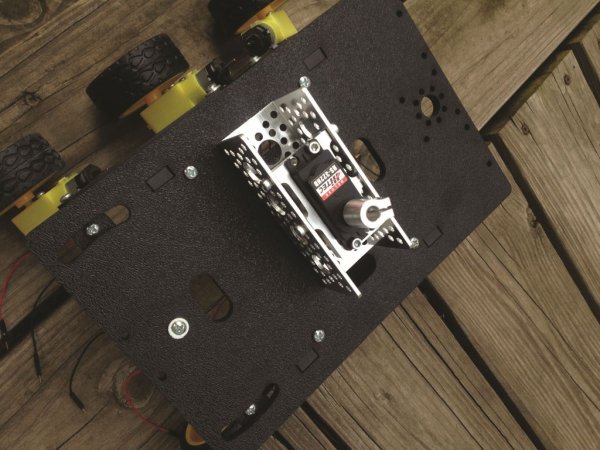 Secure the 9″ channel to the 3¾” piece you already attached. Use a dual screw plate as shown. 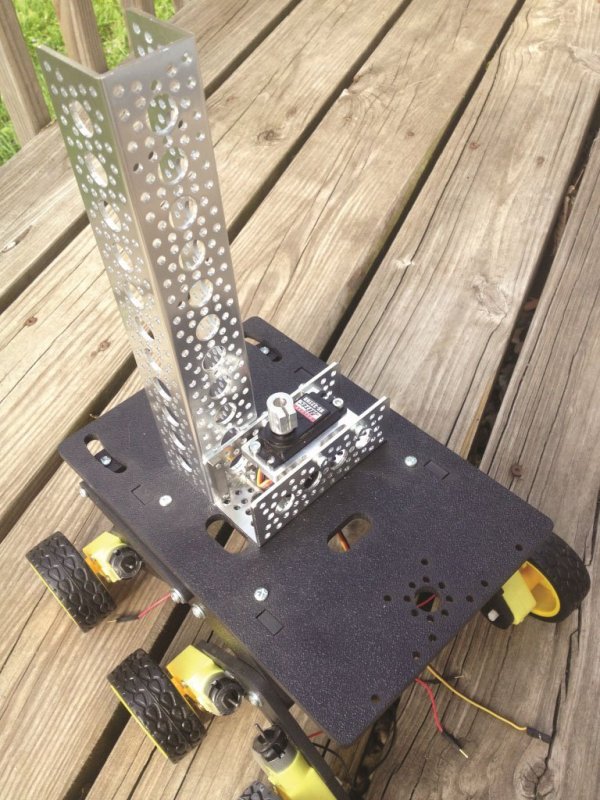 Attach the second 3¾” channel at the top of the 9″ piece using the second dual screw plate. 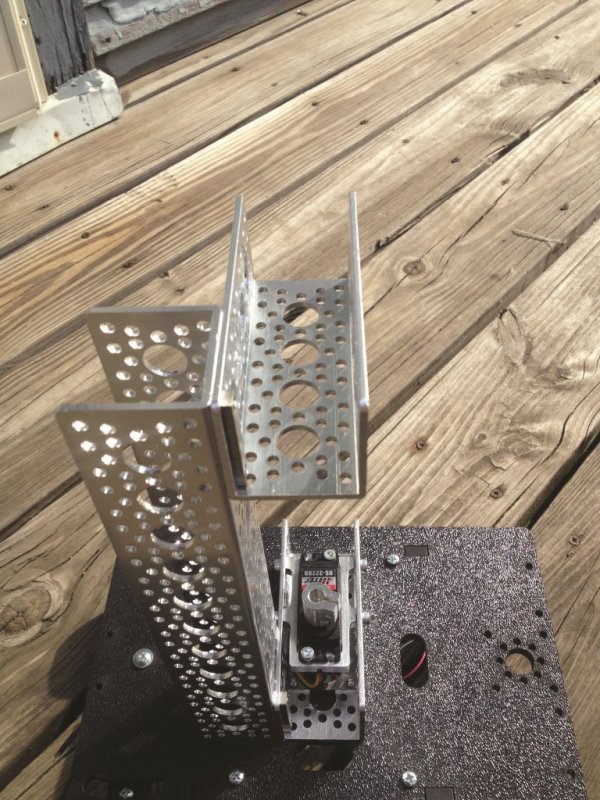 Attach the bearing so that it lines up with the servo’s shaft. Thread the D-rod through the bearing and secure it in the servo’s coupler. 8. ASSEMBLE THE FEET AND BODY SKINS

The Creeper’s skin consists of a series of laser-cut wooden box shapes that rely on gravity to stay on the robot.. The skins are all made from ⅛” plywood, except the head base is ¼”. You can find the blueprints among the downloads for my book at github.com/n1/MinecraftMakers, in the Chapter 9 folder.

It’s time to paint the body and feet that delightful Creeper green. The image below shows my creation with one coat of paint. Once the paint is dry, drop the skin down on the robot  with the 1/4″ rod projecting from the top. It should fit nicely without any problem. Use 1/4″ plywood, 8″×8″ square. Drill a 1/4″ center hole as well as the mounting holes for the setscrew hub; then secure the hub with the small square screw plate. Assemble the panels of the head. Once again, a plywood box! This one needs holes for eyes. Paint the outside of the head green to match the skin, but also add the black parts of the face. I suggest painting the inside of the head black so the eyes look blacker. Find a spot on the underneath of the robot to install the Arduino using #4 hardware. You can drill into the Bogie’s ABS chassis if you want, or use one of the available mounting holes. Attach the servo wires to the motor shield’s Servo 1 pins. Attach the 9V battery to the chassis but don’t plug it in yet. (the image shows it plugged in)This powers the Arduino but not the motors. Attach the 4xAA battery pack to the chassis and plug it into the motor shield’s Power terminals, as shown.. This pack powers the motors separately. You have six motors, three on the left and three on the right. Combine the leads as you see in the image below, so that the M3 motor terminals control one side, and M4 controls the other. The Bogie’s motors are modest in size and stacking them won’t strain the motor shield’s capabilities. 20. WIRE UP THE NEOPIXEL EYES

You’re using two NeoPixel Jewels for eyes, to create the telltale glowing red that signals an imminent explosion. Connect both Jewels’ VIN (red wire) and GND (black) pins to the Arduino’s GND and 5V pins. The data wire goes from digital pin 6 on the Arduino to the IN pin on the first Jewel, and then from OUT to IN on the next eye. You’ll need three wires to attach the Creeper to its controller. One wire connects to digital pin 0 on the Arduino, another to pin 1, and a third to GND. You’ll connect these to their counterparts on the controller’s Arduino. You can make these wires as long as you want, but 6′ is probably good enough. PROGRAM THE CREEPER
The Creeper is a simple robot, and this is reflected in the code.