Ten months ago, the chipmaker Adapteva unveiled a bold quest—to create a Raspberry Pi-sized computer that can perform the same types of tasks typically reserved for supercomputers. And… they wanted to sell it for only $99. A successful Kickstarter project raised nearly $900,000 for the so-called “Parallella,” and the company got to work with a goal of shipping the first devices by February 2013 and the rest by May 2013.

As so often happens, the deadlines slipped, but Adapteva has done what it set out to do. Last week, the company shipped the first 40 Parallellas and says it will ship all 6,300 computers ordered through the Kickstarter by the end of August. Anyone who didn’t back the Kickstarter can now pre-order for delivery in October.

The first version of the board was finished in January, but it cost $150 to produce. “After that it was iterating time after time to get the bill of materials down to something we wouldn’t be losing $50 per board on,” Adapteva CEO and founder Andreas Olofsson told Ars. Adapteva called Parallella “A Supercomputer For Everyone” in the title of its Kickstarter. Of course, each individual Parallella computer is not a supercomputer in and of itself. But each is capable of the types of parallel computing tasks performed by supercomputers—on a smaller scale—and they can be joined together in Ethernet-connected clusters to create something resembling a supercomputer, Adapteva says.

“The board obviously isn’t a supercomputer,” Olofsson said; however, “you can put thousands of these boards together at a fraction of the cost you would pay for a traditional supercomputer.” The goal is “democratizing access to cheap, scalable parallel hardware.”

Besides the general purpose CPU and co-processor, Parallella has 1GB RAM, a bootloader running on 128Mb of flash memory, a MicroSD slot for holding the operating system, two USB 2.0 ports, four general purpose expansion connectors, Gigabit Ethernet, and an HDMI port. It is shipping with Ubuntu 12.04, but it can run other Linux operating systems.

The ARM chip is from the Zynq-7000 series by Xilinx, with a field-programmable gate array (FPGA)—that means the hardware can be improved even after manufacturing.

“It’s like a blank canvas for Boolean logic,” Olofsson said. “You can implement anything you want while the board is in the field. A portion of that chip has a dual-core A9 that runs Linux like any other SoC (system-on-a-chip). The other part you load in during boot time a bit file that configures what that logic should do.… Most boards you have today are all locked down. You can only change things in software, you can’t change the hardware. With this board you can actually change the hardware.”

Lowering the cost to build

Putting all of the components together for less than $99 (to give Adapteva a small profit on each board) was no small feat. With no discounts off list prices, the board would cost about $300, Olofsson said.

Buying in bulk lowers the prices, but 6,300 units isn’t that large an order in the semiconductor market. The most expensive component on the board is the dual-core ARM processor, but one component in particular gave Adapteva trouble in the sourcing process, ultimately delaying the project by eight weeks, according to Olofsson. He declined to identify which component that was.

He chalked up project delays in part to “optimism. You’re underestimating how long things are going to take because you want them to happen quickly. That was part of it. Part of that was really underestimating how difficult it would be to get that many parts onto the board at that price point.”

Kickstarter backers will get a board with better specs than initially promised, featuring a Zynq-7020 chip, with more FPGA capability than the Zynq-7010 chip initially planned. For people who pre-order now, the Zynq-7020 is an optional upgrade, doubling the price from $99 to $199. Adapteva has gotten about 1,000 pre-orders since opening it up last week.

The first boards were put together by a manufacturer in New Hampshire, not far from Adapteva’s headquarters in Lexington, MA. Olofsson wouldn’t comment on whether all 6,300 will be built in New Hampshire, but he said it was convenient that “we didn’t have to travel to Asia during the initial bring-out. We would go up to New Hampshire and work with them when there were issues.” 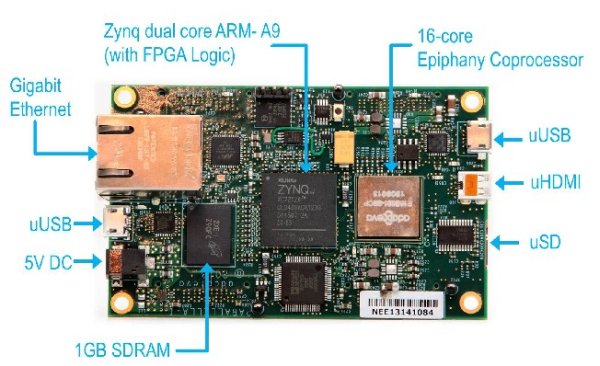 Parallella is open source hardware, meaning Adapteva released all the details about the components to the public. Board design files are on GitHub, for example. Theoretically, companies besides Adapteva could build Parallella computers.

Olofsson called the initial shipments last week “Gen 0,” whereas “Gen 1” will ship to the rest of the backers in August. With Gen 0, “the USB and HDMI aren’t completely fleshed out in terms of drivers and functionality,” Olofsson said. For that reason, the backers who were originally promised February shipment dates (and paid more for the privilege) are being given the option to upgrade to the version with the 64-core Epiphany chip, he said.

For more detail: Creating a $99 parallel computing machine is just as hard as it sounds

Setting up phpMyAdmin and MySQL on Raspberry Pi

As part of my ongoing efforts to create a really awesome alarm clock with my Raspberry Pi, I had to...