Gumstix added to its line of “Gumstix Pi” add-ons for the Raspberry Pi and Pi Compute Module 3 with a Stepper HAT, a breakout, and a PoE-driven LoRa gateway.

In August, Gumstix announced several LoRa add-ons to its Geppetto board design service that work with a RisingHF LoRa module, and launched LoRa boards based on its Overo module, Arduino boards, and the Raspberry Pi Compute Module 3 (RPi CM3). Now, the company has introduced a Power-over-Ethernet ready version of its Pi Conduit board called the Pi Conduit PoE, and launched a Pi Newgate breakout board that works with the RPi CM3 and the original compute module. Gumstix also launched a HAT add-on for the Raspberry Pi 3 SBC called the Pi Stepper HAT.

A sampling of Gumstix Raspberry Pi expansion boards, new and old (left to right, top to bottom): new Pi Stepper HAT, Pi Conduit POE, and Pi Newgate; existing Pi Sensor Board, Pi Compute Dev Board, Pi Compute Fast Flash, and Pi USB Ethernet
(click image to enlarge)
In addition, the company has introduced two PoE modules that can work with a variety of Gumstix boards built with its Geppetto D2O online development service. Like the company’s previous RPi add-on boards (see farther below), all these boards were built with Geppetto and can be modified by customers using the drag-and-drop design service.

All the products are supported with a new custom Yocto Linux “Morty” build optimized for the Raspberry Pi. The Yocto image “ensures that the latest drivers, apps and kernel features are at a developer’s fingertips in a fast, lightweight, and developer-friendly OS,” says Gumstix. The Yocto image includes drivers for modules found in the Geppetto D2O module library, as well as scripts, apps, and systemd services. There’s also a Gumstix Smart repository that features a wide variety of RPM packages.

We’ll start with the $35 Pi Stepper HAT, which differs from the other boards in that it’s a standard HAT add-on for the Raspberry Pi 3 or earlier RPi models. The 65 x 57mm board controls 4-wire stepper motors with rotational accuracy below a tenth of a degree, says Gumstix. The core component is TI’s bipolar DRV8846, a 4-18V, 1.4A stepper motor driver with 1/32 microstepping capability. 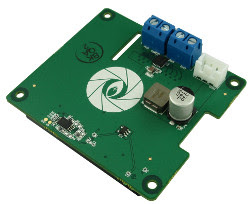 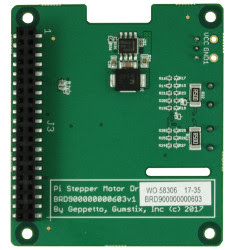 When used with a 1.8°/step motor, the Stepper HAT can divide a 360° rotation into 6400 distinct positions. In addition, “variable torque and decay rates, as well as adaptive blanking, make this stepper motor driver a versatile robotics component,” says Gumstix. The board drives the stepper motors using a 6-36V input via the battery connector. 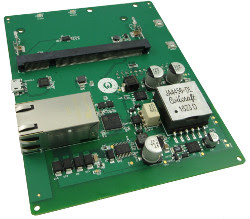 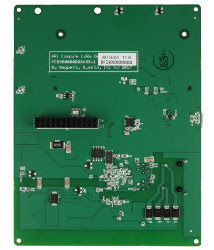 Gumstix Pi Conduit PoE, front and back
(click images to enlarge)
The layout is different from the Pi Conduit, but the functionality is very similar except that instead of a standard 10/100 Ethernet port, you get a Gigabit Ethernet port with PoE circuitry. This enables deployments in areas where standard power connections are unavailable. The Pi Conduit PoE also includes a micro-USB console port.

The board’s GbE port with PoE is also available as a separate module that can be used with other Geppetto compatible COMs or SBCs that support native Ethernet. In addition to this Gigabit With PoE module, there’s a Gigabit with PoE over USB module for boards that use a USB to Ethernet controller interface. No further details were supplied.

The $85 Pi Newgate is a breakout board for the Raspberry Pi Compute Module and RPi CM3 that lets you monitor digital, analog, and differential signals.

Gumstix Pi Newgate
(click images to enlarge)
The headers on all four sides of the board provide 3x terminals for each 0.1″-pitch pin that correspond to the 200-pin SODIMM connector for the Compute Module. There’s also a micro-USB serial console port and level shifters that accommodate 3.3 and 1.8 Volt logic levels.
Other Gumstix Raspberry Pi boards
In addition to its latest boards and the original Pi Conduit, Gumstix has previously introduced other Raspberry Pi add-on boards that can be customized and manufactured with Geppetto:

Gumstix Pi HAT Sensor Board — This $49 RPIi HAT board, which is also referred to as the Pi HAT Expansion Board, provides a barometer, ambient temperature sensor, 9-axis IMU, and 3-axis gyroscope. There’s also a UART-based, 5-pin Pre-Go connector for hooking up Pre-Go GPS modules. Other features include LEDs, pushbuttons, and an RTC with battery holder. 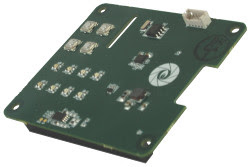 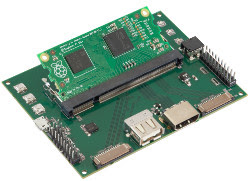 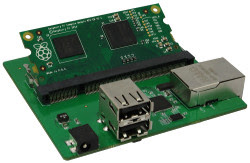 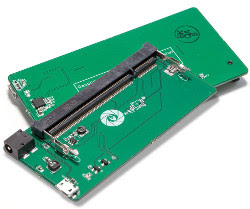