It’s fair to say that right now is probably the worst possible time you could choose to design a new piece of hardware. Of course the reality is that, even in the middle of a parts shortage that’s driving the cost of many components through the roof (if you can even find them), we can’t just stop building new devices. In practice, that means you’ll need to be a bit more flexible when embarking on a new design — it’s like the Stones said: “You can’t always get what you want / But if you try sometime you’ll find / You get what you need” 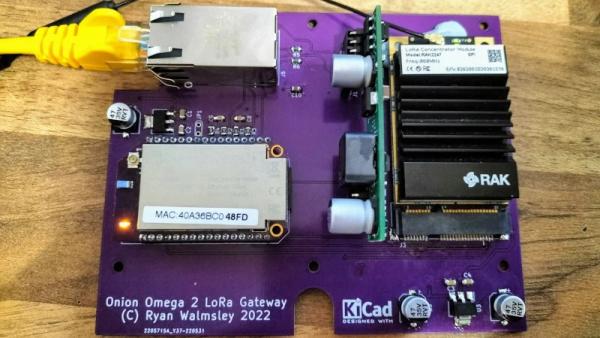 For [Ryan Walmsley], that meant basing his new outdoor LoRa gateway on the ubiquitous Raspberry Pi was a non-starter. So what could he use in its place? The software situation for the Nano Pi Duo looked pretty poor, and while the Onion Omega 2+ was initially compelling, a bug in the hardware SPI seemed to take it out of the running. But after more research, he found there was a software implementation that would fit the bill.

With his Pi alternative in hand, now he had to find the rest of his components. Since the design wasn’t something that would necessarily go into production, [Ryan] reasoned he could get away with using off-the-shelf modules from the likes of Adafruit and The Pi Hut rather than implementing their functionality on his PCB. It would be a bit more expensive, but meant less work for him. With the big features like Power over Ethernet handled, he just needed to tie it all together with some 0805 passives for easy hand assembly.

Testing and assembly went better than it did for his previous LoRa gateway, and the resulting board fits snugly into a commercial weatherproof enclosure. [Ryan] says each one costs between $300 and $350 USD to put together, but it sounds like he hasn’t decided what the fate of this particular design is yet. Perhaps your comments below will help him chose whether he tries to sell them as kits or release the files and turn this into an open hardware project, so don’t be shy.

Source: DESIGNING A LORA GATEWAY DURING A PART SHORTAGE

This tutorial suggests that you make a 2 player Arcade Stick totally laser cut. Along with this tutorial, you can also find a Bartop...