DiddyBorg is our robust robot kit for the Raspberry Pi. He can be controlled via autonomous software, via a Bluetooth controller such as the PS3 or over Wifi through a keyboard. Check out this video of him rolling around!

This Instructables is concerned with the building of the hardware. There is some software preparation which should be done with the Raspeberry Pi before continuing as the HDMI slot becomes difficult to access once the Raspberry Pi is in the chassis. Head over to this page to prepare your Pi.

To build your DiddyBorg you will need:

Peel white plastic protection layer from Perspex and gently clean all perspex parts with a soft cloth such as a leather chamois or a glasses cloth and clean water. Some marks may be left by the Laser cutter.

If these are particularly hard to shift, a small amount of very weak IPA solution or whiteboard cleaner can be used. Do not use too much or you may damage the perspex.

Step 2: Place screws and washers into the motor mounts.

Place 4 of the M3x12mm Cheese screws and 4 of the M3 Spring washers into each of the 4 motor mounts to be placed at the corners of the chassis. Make sure the orientation of the motor mount is as per the picture.

Please note the kit contains M3x12mm and M3x8mm Cheese screws. Make sure you have the longer screws for this step. Step 3: Place your motor mounts on to the perspex

Take the base board (the one without the PiBorg logo) and orient it so that the short thick rectangular cut out is at the top left, as in the picture. Place the motor mount on top, with the rounded edge facing up, and locate the four screws in the holes of the perspex.

Step 4: Attach your motor mounts to the base board

Hold the screws in with your finger tips, and flip the board over.

Place a M3x40mm Black Nylon post on the screw which is closest to the corner of the Perspex board. Tighten this gently with your fingers. We will tighten this correctly later.

Step 5: Add spring washers and bolts to the remaining screws

Place 3 of the M3 Spring washers and 3 of the M3 Lock nuts on the remaining screws, and tighten gently with your fingers.

Do the same for the middle motor mount. Using 4 of the M3x12mm screws and 4 of the M3 spring washers on one side, but on the opposite side use 2 of the M3x40mm Black Nylon posts on the two holes towards the outside edge of the Perspex.

Do not use a spring washer with the posts. Place 2 of the M3 lock nuts on the remaining screws.

Repeat the previous two steps for the remaining motor mounts.

Position the mounts so that they are all in a line.

Once the alignment is correct, tighten the Nylon posts gently by hand. Be careful not to overtighten, or you could strip the thread from the Nylon post. We just need to tighten to the point where we have crushed the spring washer underneath so it is flat.

Step 9: Tighten the nuts on the motor mounts

Tighten the lock nuts and screws using a flat bladed screw driver and an adjustable spanner or a 5.5mm socket.

Do not over-tighten or you may crack the perspex. Again, tighten just to the point where the spring washers are flat.

Turn your board to that the posts are pointing upwards.

Place 3 of the shorter M3x10mm black posts in the holes as shown in the image. They should be oriented so the post are on the opposite side to the longer posts on the motor mounts.

Gently tighten the M3x10mm black posts with 3 of the M3 Black Nylon nuts on the side facing upwards.

Your Raspberry Pi will have different mounting holes dependent on which variety you have.

Once you have attached your mounting posts for your Raspberry Pi, flip your base over so that the longer posts are pointing downwards, and your motor mounts are pointing upwards.

For each motor you will need 2 of the M3x8mm Cheese screws and 2 of the M3 Spring washers.

Place the motor in the mount and align the motor holes with the mount. Insert the screws and washers and tighten into the motor until the spring washers have compressed.

Note the motors are all facing the same way; with the stickers facing upwards. This keeps the polarity of the motor connections consistent which will be helpful later.

Reapeat with the remaining 5 motors.

Take a Motor Hub and a Motor grub screw.

Use the Allen key in the motor kit to put the grub screw in the hub. It should go in freely, do not use force or it may be cross threaded. If it feels like it is tight to screw in, loosen completely and try again. The motor has a detent or “flat” surface ground into the shaft.

This should be aligned with the grub screw so the screw is perpendicular to the flat surface.

Align the hub so that a small amount of the flat is visible and tighten. Add the second grub screw to the under side of the hub and moderately tighten.

Place the PicoBorg Reverse on the black posts and attach with 2 of the M3 Black Screws.

Place 2 of the M3 white washers from the BattBorg post kit over the remaining hole and add an M3x10mm black post from the same kit. Tighten gently.

Step 14: Wiring up the first motor

The next few steps will show how to connect the PicoBorg Reverse up to the motors, take your time here as there are 12 connections to make and it will cause confusion later if this isn’t correct.

Take the red wire, and strip approximately 3mm of insulation from the wire. The easiest way to do this is with a wire stripper. If you use pliers or scissors, make sure you do not damage the conductor.

Make the wire follow the path to the M2+ connector on the PicoBorg Reverse. This is the connector furthest from the center. The wire should not be too slack or too tight. See the picture for a good indication of how much slack to give.

Once lined up correctly, cut the cable approximately 10-15mm beyond the edge of the board.

Solder the positive connection to the motor. Be careful not to drip or spray solder on to the Perspex (a small piece of cardboard or similar is useful to protect the Perspex here). If you are new to soldering, it’s a good idea to have someone help you. 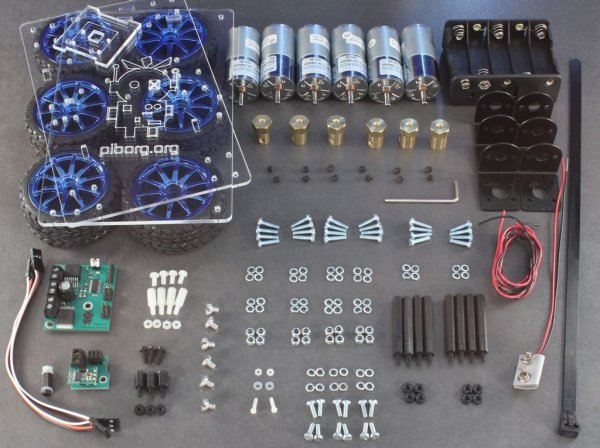 Step 15: Wiring the rest of one side with the red wires

Repeat the previous step for the other two motors on the same side.

Ensure they are in as deep as they will go, and tighten. If the Red insulator is being ‘bitten’ by the clamp, you will need to strip slightly more insulator off the cable. If there is too much conductor exposed, trim the ends off the conductor slightly. The picture give a good indication of the ideal amount to expose when connecting the red wires.

Once tightened, gently pull on each individual cable to ensure it has been properly ‘bitten’ by the clamp of the screw connector. If not, release connector and try again.

Step 16: Wiring the same 3 motors on one side with the black wires.

Take a black wire and route it to the remaining connector on the motor. This will go to the terminal M2- on the PicoBorg Reverse.

Solder the wire to the motor on the connector next to the red wire and strip the black wire at the PicoBorg Reverse connector as in the previous 2 steps.

Repeat for all motors on the same side as the motors with red wires.

Take the red wires again and repeat the red wire connections for the remaining 3 motors on the opposite site – red wire to red dot on the motor, but this time connect them to the M1+ on the PicoBorg Reverse.

Solder the wires connected to the motors. Tighten these three red connections in to M1+.

Give Your Raspberry Pi Robot a Worm Brain

The C Elegans worm is one of the most-studied animals in science. In neurobiology, it's the most basic brain model...