Inspired by all the great Raspberry Pi projects out there, I thought I’d try designing & building something simple myself. The launch of the Raspberry Pi 3 in March 2016 got me enthusiastic about building my very own cluster of Pi’s (a “bramble”

). Along the way I got to play with a 40W laser cutter, and spent more than a few hours learning basic design with the SketchUp and Inkscape applications: 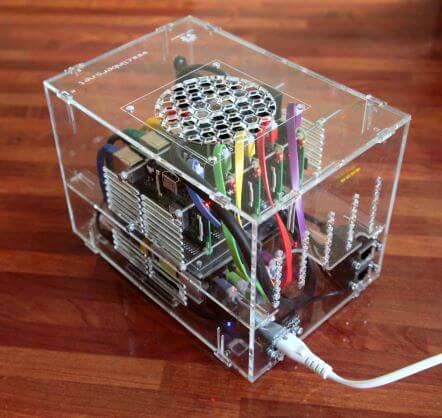 My design is fairly similar to that of the commercial Pico Cluster (USA) who sell a fully-finished 5 node cluster of Raspberry Pi 2s for US$499. Once you add on international shipping, import tax, VAT, etc. it becomes a rather expensive £488.30 here in the UK…

Originally I made my design in 3D using the free version of SketchUp and built rough templates of the Pi’s, network switch, USB hub, sockets, etc. However this proved very messy exporting to a 2D design in SVG/DXF format, ready for the laser cutting. I tried using Simon Beard’s SVG plugin for SketchUp, but my SketchUp file had all sorts of rubbish in it which caused problems, and the resulting SVG files had to be laboriously cleaned-up by hand in Inkscape. 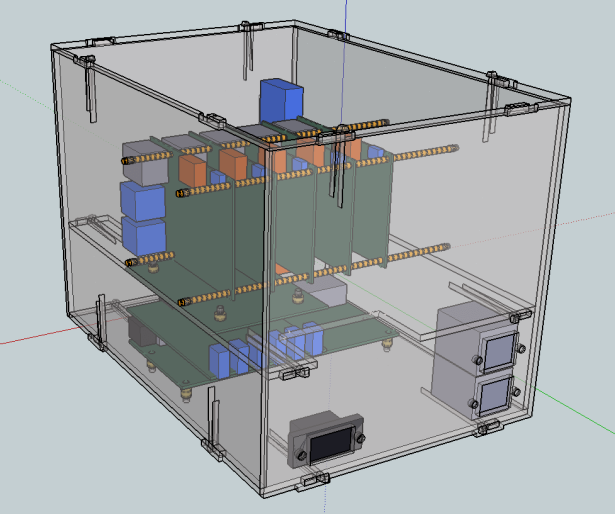 I might have been better off designing in 2D with Inkscape, and then using SketchUp to make a 3D model to check component spacing, etc?

I used the free Inkscape application for 2D design, ready for exporting to the laser cutter. Each colour is a different pass of the laser, at different power/speed levels, so the green lines are cut first to make holes for ports/screws/ventilation, orange is text/lines that are etched, yellow is text that is solid engraved and finally blue cuts the outside of each panel.

Download files for laser cutting on two 600x400x3mm sheets (the largest I could cut):

Using exactly the same design files in the laser cutter, I made a couple of prototype cases in 3mm MDF (which is cheaper than acrylic). The first version (left) fitted together and worked, but it was very tight getting all the cables routed, and there was no ventilation at all. The final design (right) is narrower, shorter, but much deeper. Each case panel has annotations etched to make it easier to join in the correct order, and plenty of vents were added. External ports were moved, internal cable routing much improved, and the case lid now has half the number of elastic clips.

Each case took two 600x400x3mm sheets, as unfortunately the design doesn’t quite fit on a single sheet.

Laser cutting was done at Access Space in Sheffield, with their 40W laser. The final case was cut in 3mm extruded acrylic (perspex), and took about 30 minutes. The design could be much-optimised for a more efficient cutting order. Extruded (rather than cast) acrylic has a fine thickness tolerance, which is required for the elastic clips to work.

If you are in Sheffield, Hindleys is a good supplier for a wide range of acrylic sheets.

There are various solutions for joining case panels together (glue, screws, etc) but I was particularly impressed with this ‘elastic clip’ designed by Patrick Fenner of Deferred Procrastination in Liverpool. It enables a remarkably strong case to be made without any extra parts, which somehow seems more ‘elegant’.

Full details of his clip design, including downloadable SVG files, are at: Laser-Cut Elastic-Clips.

My prototype case originally had 8 elastic clips holding the lid on, which was completely over-the-top (as well as needing at least 3 hands to fit!). I’ve replaced 4 of the clips with a simple tab instead, which works well.

At idle, the entire system of five RPi3s, network switch & USB hub sips a mere 9W, and at 100% load it still only uses 22W in total. There is the possibility of further reducing the power requirements by disabling WiFi, Bluetooth and HDMI?

The USB hub can supply up to 60W (2.4A per Pi), which is more than enough for a couple of power-hungry external devices to be plugged into the USB ports. Using:

to measure the SoC core temperature, the cluster idles at 45°C (113°F) with passive cooling.

the SoC core temperatures reach 80°C (176°F) after 7 minutes. At this point the SoCs automatically throttle down their clock speed, to avoid overheating. They can safely run long-term at this temperature, but you don’t get maximum performance.

What about active cooling? You can optionally strap on a 92mm fan if you are going to run the cluster at high load for extended periods.

Exactly the same case design should work with Raspberry Pi 2s which run much cooler than the model 3, and so shouldn’t need any active cooling.

If you want to run the cluster at 100% for extended periods, I’ve designed the case lid for externally mounting a suitable 92mm fan, which should be able to be run from the 5V power+ground rails of the GPIO. A neat solution would be to control the fan with the PWM pin, so it only spins up at high loads, although a quality modern fan should be nigh-on silent anyway.

So far I’ve tried a Nanoxia Deep Silence 92mm Ultra-Quiet (£7.82), running at its slowest speed (5V) powered by one of the Pi’s. At idle the cluster reaches 37°C (8°C improvement). At 100% load the cluster reaches an average of 74°C, although two of the Pi’s get very close to throttling at 79-80°C. I have to get my ear within 50-75mm (2-3″) to hear even the slightest whisper from the fan, and the supplied rubber gromets definitely do a good job of isolating the case from any small vibrations.

I may try a more powerful 5V fan, or use a boost converter circuit to power the fan at 7V/9V so that it spins much faster. 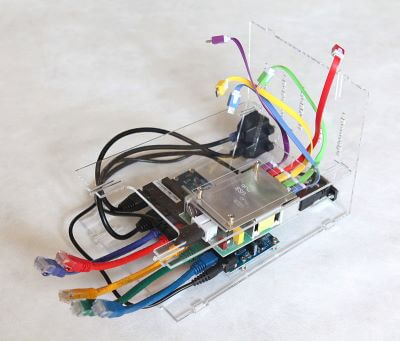 This is an autonomous cardboard quadcopter driven by a Raspberry Pi. It is capable of wireless communication as well as...