Fastest consumer level extruder on the market. High quality & precision filament, thanks to a new & innovative approach to the process. 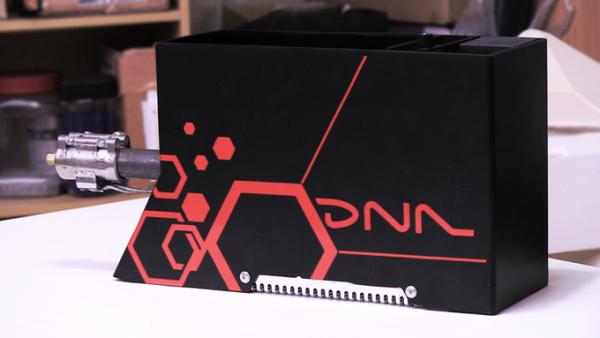 The 3D printing community is growing and innovating each day. Printers are becoming better and better, with higher print speeds, new features and capabilities. It is now time for the 3D printers’ counterpart, the filament extruder, to join the race.

Introducing the DNA Extruder, a never-before-seen combination of speed, precision, quality and aesthetics. An entirely new approach to the filament extrusion process.

DNA is a new and innovative filament extruder created by Protea Design. Meticulously engineered, DNA is aiming to bring a new meaning to dependable high-speed extrusion. Our goal was to create an extruder which has features and performance of a machine double its price. After nearly 3 years of development we were able to create something that is compact, fast, tough, lightweight, affordable and easy to use. The DNA Extruder will be the last filament extruder you will ever want to own.

During development of DNA we paid special attention to solving the issue of slow extrusion that many extruders available on the market face. With the use of our patent pending screw and barrel design we were able to increase extrusion speed to levels never before seen in an extruder priced below $1,000 or even $2,000. The DNA Extruder is capable of extruding filament at a rate of 10 feet per minute, which amounts to 1 full roll of filament in 1 hour. These speeds were easily reached even while extruding ABS materials, which is a much tougher material to extrude than PLA. With the extrusion speeds provided by the DNA Extruder you will never have to wait more than 1 hour to get back to 3D printing with a full roll of filament.

To keep up with the extrusion speed of the machine, we equipped the extruder with a hopper large enough to hold roughly 1kg of pellets when fully loaded. With a fully loaded hopper you will be able to extrude an entire roll of filament in one go. Just load the hopper and have a brand new roll of filament in an hour. No more waiting around and feeding the machine, or being restricted by a small hopper.

Specifically for this project we designed a new and innovative thermoplastic extrusion screw and barrel combo, which allowed us to reduce the overall size of the machine and provides users with a machine capable of extruding a higher quality filament. The use of this specific thermoplastic extrusion screw helps to promote higher pumping pressure for extraction of water vapor and air from the filament, and improves mechanical operation through a direct connection to the motor. All of this amounts to a much higher quality and consistency of filament being extruded. Each extrusion screw is individually machined out of a block of steel and tested by a professional before it is delivered to us for further testing and installation.

3D printers are one of the coolest and most efficient ways for you to make your ideas go from the...