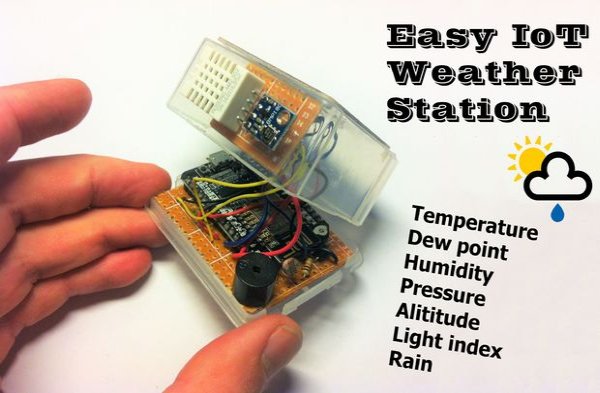 A weather station is a fun project that teaches you a ton about electronics with the added benefit being an actually useful little device. The project requires a bunch of cheap parts and sensors totaling less than $15, and the whole thing ends up fitting in your hand. The station creates a web site that monitors temperature, dew point, humidity, pressure, light index, and rain (Thingspeak channel). It’s a pretty easy set up, and you’ll just need some basic electronics skills to get it going.

There are some other NodeMcu or ESP8266 weather stations published on the web. Nevertheless they do not include the sensors I used and often are programmed in the more difficult language: LUA. This weather channel has got the following (unique) characteristics:

This channel will stream the following sensor data to a Thingspeak channel: