STMicroelectronics, one of the leading semiconductor manufacturers, launched the STM32MP1 microprocessors series back in February 2019 which are based on an HSA (heterogeneous system architecture). The microprocessors are based on an Arm® Cortex®-A7 core running at 650 MHz and Cortex®-M4 at 209 MHz combined with a dedicated 3D graphics processing unit (GPU) and MIPI-DSI display interface and a CAN FD interface. 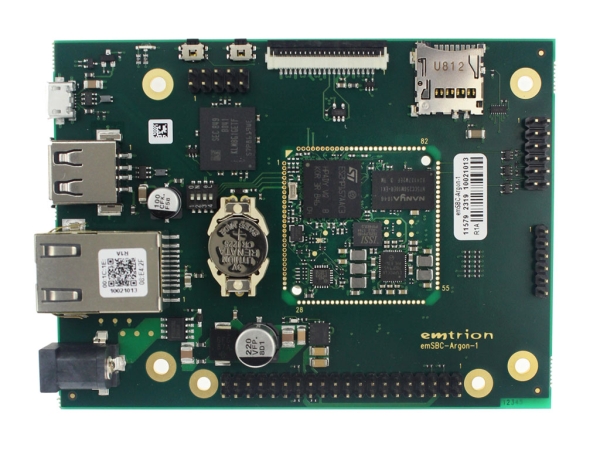 The STM32MP1 microprocessors series is expected to follow new applications in the computing world targeting use in Industrial control, HMI (Human Machine Interface), Gaming console, Industrial IoT, and many more. Emtrion, the Germany based company is banking on the STM32MP1 microprocessors and they announced an upcoming computer-on-module based on the STM32MP1 back in March this year. The module was called the emSTAMP Argon Module and is tailored for graphics, communications, and industrial IoT applications.

The emSTAMP-Argon module is available in two variant; STM32MP157A and STM32MP157C models. Both models include a Vivante 3D GPU that supports OpenGL ES 2.0, adds dual FD-CAN support, a WXGA resolution (1280 x 800) at 60fps video. The STM32MP157C goes a step ahead by adding a hardware crypto chip with TRNG, tamper, secure boot, and TrustZone support.

Read more: EMTRION LAUNCHES A SBC BASED ON THE ST STM32MP1