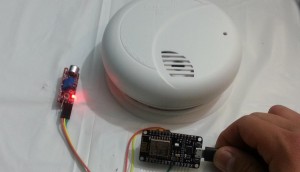 This tutorial will teach you how to build a Wifi Smoke Alarm Notifier for about $10 dollars. You won’t have to code anything, and you won’t have to solder or buy expensive electronics equipment. Any services you are asked to use will be 100% free. Its that easy. Lets get started!

There’s an old saying, If a tree falls in a forest and no one is around to hear it, does it make a sound? What about your home or office smoke alarm? If it goes off, but you’re away from home and no one hears it your house is toast. That definitely matters. While you might think this is unlikely to happen, the truth is that unattended cooking is the #1 cause of home fires.

However with the emergence of IoT devices, now there are some cool products on the market right now that will send you a smartphone notification when your smoke detector goes off.

Nest Smoke Alarm + Carbon Monoxide Monitor ($99, Nov 2015) – A replacement for the traditional smoke alarm that sends an alert to your phone when it detects smoke.

Roost Smoke Detector Smart Battery ($40, Nov 2015) – 9V Battery you can install in any traditional smoke detector, which will notify you via a smartphone app if your alarm is going off. Battery lasts for 5 years, at which point the non-smart portion of the device needs replacement.

These look like great devices, but for some consumers they will be too expensive. Especially if you need multiple devices, it starts to get very expensive very fast. What if I told you you could build yourself a simple sound sensor that sends you a smartphone notification, SMS, and even call your phone when your current smoke detector rings. You could also build this for about $10 bucks. If that sounds interesting to you, read on!

I know you’ve seen these types of tutorials on the internet before, and usually they say something like, just buy a breadboard, soldering iron, breakout board, serial adapter, etc. etc. and after you’ve spent about $50 dollars you can build a cheap Internet of Things (IoT) device. Well, sorry internet. We nerds sometimes forget that most people don’t really have these things lying around. That’s why I built this website around the idea that IoT devices can be built without coding knowledge, soldering, or complicated prototyping.

One of the reasons why IoT devices can be built so easily now is because of the ESP8266 development board. IoT enthusiasts have been excited about the ESP8266 because its a full system on a chip (SoC) that has onboard wifi connectivity that can cost as low as 3 dollars. The IoT community has been building with Raspberry Pi and Arduino microcomputers for a while now, and while capable these computers cost up to $35 dollars, don’t have onboard wifi, and aren’t easily powered with common ports like microusb. The standalone ESP8266 chip is great, but doesn’t have an easy to use power supply and it’s hard to configure without special cables.

Also, the price of the board is less than $5 dollars! (~ $4.60 USD via AliExpress, Nov 2015) This means that many simple IOT devices can be built for 10 dollars or less. So without further ado, lets build a $10 Wifi Smoke Alarm Notifier!

(Note: I can already hear a thousand nerds out there groaning because I’m using the dev board instead of the standalone chip. Remember this page is about building IoT devices easily. This isn’t the cheapest possible way to make a device, but in my opinion its worth it to pay a couple extra dollars for the convenience of a microusb interface and power connection.)

Features Synchronous Boost and Buck Controllers When Cascaded, Allows VIN Above, Below or Equal to Regulated VOUT Output Remains in Regulation...