The latest release of this popular Linux distribution just arrived. I have installed or upgraded it on a variety of computers. Here are my results.

Fedora 29 was released today, only one week later than the original schedule published last February! For those who are familiar with Fedora release cycles, this counts as being several weeks ahead of the “anticipated” release date. Congratulations and well done to the Fedora development and testing teams.

The Release Announcement gives an overview of the new release, and includes some interesting history of Fedora — 15 years since Fedora Core 1 was released! Goodness, how time flies when you’re having fun.

If you currently have Fedora 28 running, you can simply upgrade to the new release; there are two ways to do this, both are described in a Fedora Magazine article. I still prefer to use the CLI for major upgrades, so that’s what I did on my Acer desktop system. The entire upgrade process took less than an hour, and ran without any problems at all.

Note: if you are still running a Fedora version older than 28, it is recommended to upgrade only one step at a time. This can be easily done using the CLI upgrade method as well.

Of course there are all new ISO images available on the Fedora Downloads web page, in both 64-bit and 32-bit versions (1.8GB and 1.3GB respectively). These are actually Live images, so you can boot and run them from a DVD or USB stick, to see how they work with your system before installing.

There are also netinstall versions of each of those, which are under 600MB each. These just boot to a minimum installation environment, and then download the rest of the distribution as you install it.

SEE: How to find files in Linux with grep: 10 examples (free PDF)

In addition to the standard Workstation version, which is based on Gnome 3, there are the usual variety of other Spins, including KDE, Xfce, LXQt, MATE, Cinnamon, LXDE and SoaS (Sugar on a Stick). These are also available in both 64-bit and 32-bit versions, but I don’t see any netinstall images for the spins.

If you are interested in ARM technology (as in Raspberry Pi), there is a Fedora ARM page, which includes all the same desktops. In the Raspberry Pi family, these will only work on the Pi 2 and 3 (including the 3+), they do not support the original Pi models or the Pi Zero. I recently wrote about testing various Linux Distributions on the Raspberry Pi, including Fedora 29.

The first system I updated was my Acer AIO desktop. I used the package manager update procedure on this — basically a series of several dnf commands that made sure the existing system was up to date, then downloaded everything necessary for the upgrade, and then finally one to perform the upgrade.

The actual download might be as much as 1.5GB-2GB, depending on what desktop you are using and how much additional software you have installed; using this procedure has the advantage of letting you continue working while the download is done. After the download is complete you can choose a time to start the upgrade process, which will then reboot to a minimal monitor mode, install the upgrade, and then reboot to the new desktop. 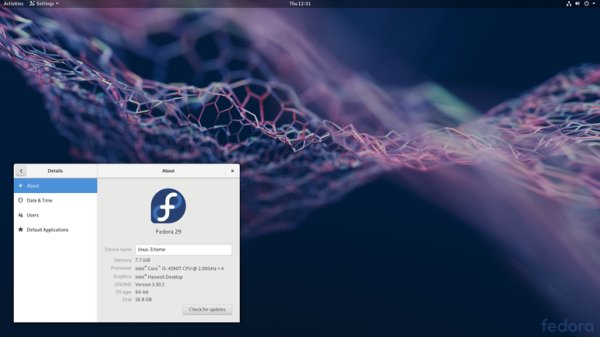 The next system I upgraded was my Acer Aspire V, but this time I made a fresh installation. When the ISO images are booted, they first ask if you want to go directly to installation, or to run a Live desktop. If you choose the Live desktop there is an installer icon on the desktop, so you can start the installation anytime without having to reboot.

The Fedora installer (anaconda) is still my favorite of all Linux installers, and they keep making it better. I know that there are people who dislike it, or claim that it is too complicated, but my take on it is this: anaconda understands every aspect of the installation process, you can do pretty much anything you want with it, and you want or need to with it, and you can handle pretty much any special situation. Some other installers may be superficially “easier” to use, but I have almost always run into cases they couldn’t handle, or special needs or configuration that I couldn’t manage with them. For just one example, how many of the supposedly “easier” installers don’t let you specify the EFI boot partition?

Anyway, I only noticed one significant change in anaconda this time. For the past several releases there has been some duplication between the final configuration of root and user accounts made in anaconda, and the configuration process that automatically runs the first time Gnome 3 is started. With this release, the duplication has been removed — if you are installing the Gnome version, anaconda doesn’t ask for the user/root info, so you only enter it once on first boot. If you are installing any other spin (such as the LXDE version below), anaconda still asks you for that info.

I have also installed Fedora 29 on my Samsung N150 Plus netbook. This is a very small and light system, which I bought 8 years ago, and I still use sometimes when I travel. It only has an Intel Atom 450 cpu, 2GB of memory, and a 1024×600 display. I made a bit of a misjudgement at first, and used the same USB stick I had for the Aspire V, which installed the standard Workstation (Gnome) version. Not a good idea… it worked, of course, but performance was abysmal.

I then came to my senses, and installed the LXDE version, and it performs really well. 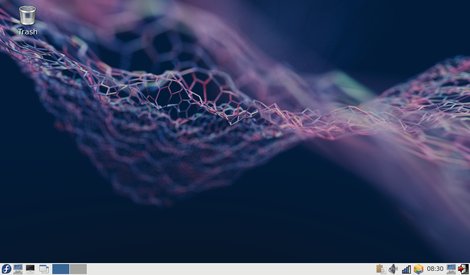 Once that was up and running, I added the i3 desktop packages (they’re in the Fedora repositories, hooray!). The lxdm desktop manager noticed that right away, so the next time I logged out, I was able to select i3 from the session list and then just login as usual. 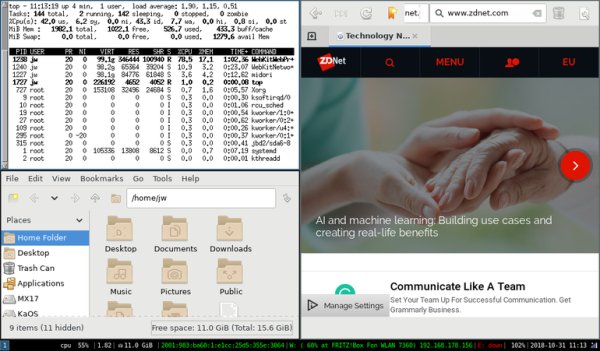 This is a really ideal setup for a very small, under-powered system such as a netbook. It uses very, very little resources, so it performs very well. Most of the time when I am using this system I have only one application running, so I am glad to have the window manager out of the way. If I happen to need to have two or more running, I can let i3 tile them, as shown above, or I can just expand whichever one I am actively using to full-screen, and then drop it back to the tiled layout when I am done.

This release also has a new Modularity feature, which decouples the package versions from the Fedora base version. I’m not going to write much about it now, because I am still experimenting and learning about it. It looks like this could be a major advantage to someone who needs to maintain a specific version of a package, rather then having it automatically upgrade to a newer version that they aren’t ready to use yet. One good example of this that affects me is using node.js version 8 or 10. 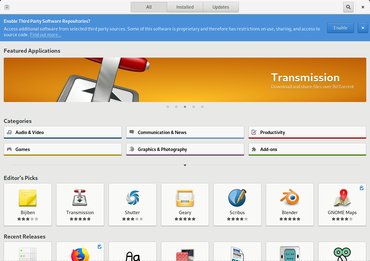 Oh, one last thing that I noticed along the way. One of the first things I have always had to do when installing Fedora is to add third-party software repositories. Fedora itself is strictly FOSS, and there are still some drivers and such (certain WiFi adapters, for example) which include proprietary firmware blobs so they can’t be in the base Fedora distribution. With this release, when you start the Software utility the first time, it asks if you want to add third-party repositories — that’s a nice touch.

If you say yes, it adds RPM Fusion (the most obvious one, for me), Google Chrome and the Copr repo for PyCharm. Good stuff, thanks guys. Oh, and if you initially say “no” to this, you can still add it later by going to the Software utility, then in the options choose Software Repositories.

If you change your mind about third-party repositories, you can go back to this in the Software Repositories screen and there is a Remove All button in the third-party section.

There is, of course, a lot more to the Fedora distribution than I have mentioned here. I’ve only talked about the desktop (Workstation) version, but there are also Server and Atomic versions. So whatever your needs, the latest Fedora distribution is worth a careful look.

Introduction With the power of Raspberry Pi, Python, avrdude, a custom HAT with cable adapter, we developed our own spin...